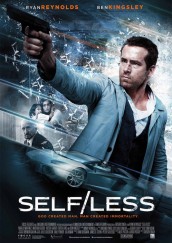 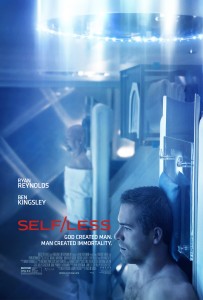 There are a number of problems with SELF/LESS, but much could have been forgiven if the movie had gotten one thing right. Anyone who has seen the trailer knows that the set-up consists of dying billionaire Damian Hale (Ben Kingsley) paying a huge amount of money to have his consciousness put into another body (Ryan Reynolds). The body in question is reportedly lab-grown, with no mind of its own, but once the transfer is made, Damian begins having hallucinations.

For this premise to work, we need to be sold on the idea that this is really the original old, wise, death-averse Damian in a new guise. However, Reynolds, a good actor with the right material, doesn’t attempt to be anything like Kingsley in mannerisms, speech patterns or any other respect. Granted, the screenplay by David Pastor & Alex Pastor doesn’t provide any assistance, apart from showing that Damian wants to do a lot of things his age and illness had made impossible – the writing doesn’t give Damian enough personality at the beginning for us to notice traits that remain with him. The only reason we believe it’s Damian in a new body is because the plot says so. More, because he’s presented as a brusque businessman with no discernible quirks or irreplaceable qualities, at the outset, we don’t care about what happens to his persona. This means that SELF/LESS is off to a poor start.

SELF/LESS, although the credits make no mention of it, would seem to be a new version of SECONDS, the 1966 film based on David Ely’s novel. The focus there was different, but the premise is the same. Here, there’s an attempt to create an intriguing moral dilemma for Damian as he winds up at violent odds with the company. The conflict is sound, except that, again, it’s not properly serviced by the writing or the execution.

Director Tarsem Singh creates plenty of beautiful shots and proficient action sequences, but they’re in the service of a story that never seems fully thought-out. The more we learn, the more we wonder about gaps in the plot and in character logic. People who’ve been lying steadily suddenly volunteer plans that Damian is practically guaranteed to find objectionable, and Damian, supposedly a brilliant deal-maker, never draws on this side of his personality once the chips are down. Then there’s a third act development caused by a character action (not Damian’s) so completely at odds with rational behavior that it’s just about impossible to take what follows seriously.

SELF/LESS turns into a generic chase film, but the really sad aspect of it is that we can see the potential for something honestly thought-provoking and moving that the execution destroys before it can blossom.