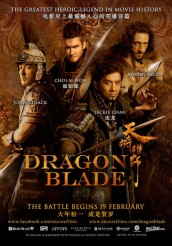 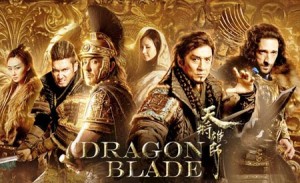 Unlikely as it sounds, there really is, or at least was, a Chinese city with a Roman name along China’s famous Silk Road (Google “Chinese city Roman name” for verification). Writer/director Daniel Lee and executive producer/action director/star Jackie Chan have taken this historical nugget and run with it. The result is DRAGON BLADE, a compact epic that espouses peace and interracial/international harmony while engaging in enormous amounts of blade-wielding, butt-kicking and blowing stuff up. It’s kind of wonderful in an insane way.

Chan plays Huo An, Commander of the Silk Road Protection Squad. The squad attempts to find peaceful solutions among the thirty-six different groups that all use the trade route. However, when the squad commits an offense, they’re all put to work repairing a crumbled city gate.

Along comes a whole Roman legion led by Lucius (John Cusack), who first seems bent on conquest. However, when Huo An defeats Lucius in single combat, we find that the general isn’t really the bad guy here. That would be Roman prince Tiberius (Adrien Brody), who has designs on the whole Silk Road.

The dialogue is a little stilted in places (especially when exposition is called for), the characters could all use some depth and there’s one minor player who is so flatly bad that the non-performance derails some moments. However, compared to the spectacle of some of the battle sequences or even the one-on-one fights – Cusack and Brody acquit themselves admirably, Chan shows why he is a revered master the world over and Lin Peng is a martial arts heroine of the first order – these complaints seem pretty minor. Writer/director Daniel Lee takes the tone from broad buddy comedy to Shakespearean tragedy to grand mythology at a running clip (the U.S. cut is 103 minutes), with time to contrast the battle styles of Chinese and Roman troops.

The Chinese characters mostly speak Mandarin and the Roman characters speak English with a variety of accents (Cusack’s is firmly American, Brody has an English lilt that comes and goes and supporting players seem to be from the U.S., the U.K. and Ireland), which works well enough. It’s weird but also sweet when, at various points, both sides burst into patriotic songs; in another movie, this would be absurd, but DRAGON BLADE forges its own genre. Unlike a lot of other action movies, it sets things up early and pays them off hugely by the end, so that we always have a good sense of what’s happening and why. Furthermore, the structure supports (rather than just pays lip service to) the message of multiculturalism. The movie wears its heart on its sleeve, but it pretty much earns the right to do so.

The MPAA deserves commendation for giving DRAGON BLADE an R rating: the organization is often criticized for being ferociously censorious regarding sex and verbiage, but blind to violence. This time, they get it right. The characters are chaste and speak politely, but commit very gory deeds. Parents should take note.