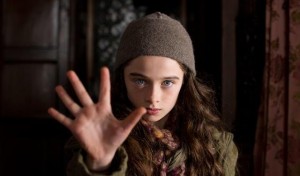 English actress Raffey Cassidy is just turning thirteen years old, but she’s already got leads in two 2015 big-screen features. Earlier this year, she played the android Athena opposite George Clooney in TOMORROWLAND, and now she’s starring as the title heroine in MOLLY MOON AND THE INCREDIBLE BOOK OF HYPNOTISM opposite Emily Watson and Dominic Monaghan. Cassidy has also played the daughter of Jeremy Piven’s title character in the PBS series MR. SELFRIDGE, and the young version of Kristen Stewart’s Snow White in SNOW WHITE AND THE HUNTSMAN and Eva Green’s Angelique in Tim Burton’s DARK SHADOWS.

Cassidy recently got on the phone from the U.K. to discuss MOLLY MOON and her other work.

ASSIGNMENT X: How would you describe Molly Moon the character and MOLLY MOON the movie?

RAFFEY CASSIDY: Well, Molly Moon is a very loyal character towards her friends and what family she has and she’s very courageous and has a great imagination. She’s very quirky and she’s very kind. When Molly gets this hypnotism book, she goes to places and hypnotizes people, so that she can become a star, but then, when she is a star, she realizes that’s not the most important thing. Her friends and family are the most important things to her, so she goes back and learns a lesson that for her life as it is, she’s happy.

AX: Did you study any actual hypnotists or hypnotism techniques?

CASSIDY: Well, I researched and saw things. I was quite shocked when I saw that people actually used hypnotism to heal people, which I thought was really good.

AX: Did you try being hypnotized yourself?

CASSIDY: [laughs] Yeah, I was getting my brothers to hypnotize me.

CASSIDY: I pretended it did. Unfortunately, not quite.

AX: Did you have to learn anything else for the film?

CASSIDY: Well, because I was working with a dog, I got to play around with it and get to know it. And also, unfortunately, it was cut from the final cut, but I got to do some wire work, which was very fun, so I had to practice it.

AX: Without getting too spoilery, do you have a favorite scene in MOLLY MOON?

CASSIDY: Well, I really fancied – we all did – when I was with all of the other children, all of the other actresses, and we did this really funny scene where we were all having a midnight feast. That was a fun scene, it was all of us together. Another one was [Dominic Monaghan] would come in and I got to kick him in the shin. I felt bad, but I kicked him in the shin and it was a fight scene.

AX: Did they do any fight training with you, to kick him in the shin without hurting him, or did they just tell you to go for it?

AX: How was it playing the android character in TOMORROWLAND?

CASSIDY: It was really fun to play Athena. It was really cool, because she had so many different characteristics that it wasn’t robot-ish.

AX: Did you like the TOMORROWLAND movie and its message?

CASSIDY: Oh, I loved the movie. I thought it was really cool, the message that comes across. Because a lot of films are about dystopia. But this is about both sides, dystopia and utopia.

AX: TOMORROWLAND was shot in North America. How did you like working on this side of the Atlantic?

CASSIDY: It was really fun. We lived in Canada for about eight months, and it was such a good time. I want to move back over there [laughs].

CASSIDY: Yes, I went not too long ago, actually. About two, three months ago. I went there for a week, and then when we were filming TOMORROWLAND, I went to L.A. and Florida. I loved it, it was so nice.

AX: Do you see any differences in the way people in filmmaking work between the U.S., North America, and the U.K.?

CASSIDY: It’s probably bigger in the U.S. and many more people there to work on the sets in different jobs. I like it big, because that means you’re coming into a big [work] family.

AX: You’ve also played the young versions of leads in two other movies. Did you study Kristen Stewart in SNOW WHITE and Eva Green DARK SHADOWS to be like them when you were playing younger versions of their characters?

CASSIDY: Yes, I watched them perform in different films that I really, really liked, the way that they acted, so I was just seeing things that they did.

AX: Do you have a kind of character that you’re looking forward to doing, that you haven’t gotten to play so far?

CASSIDY: Hmm. Probably a really action-packed girl. I haven’t really thought about that one. Yeah, somebody that gets to do a lot of action scenes and is very courageous. I think that would be a cool, fun character to play. Or maybe in a horror film.

AX: So maybe like Saoirse Ronan’s character in HANNA?

AX: Do you have any desire to do stage or more television?

CASSIDY: I have done some television, and I really, really liked it. I’ve done a few little group plays, but I’d like to do a big play production. I think that would be really fun, to just go and do it.

AX: What would you most like people to know about MOLLY MOON AND THE INCREDIBLE BOOK OF HYPNOTISM?

CASSIDY: Well, the whole message is that friends and family are the most important things. I think that people should see that, because they’ll walk out feeling very good and just know that the grass isn’t always greener on the other side.