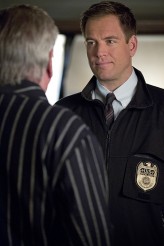 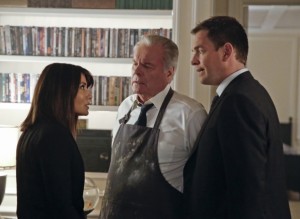 CBS’ NCIS, Tuesdays at 8 PM, is reported to be the most successful episodic series across the globe. It is a hit just about everywhere on the planet, and has spawned two popular spinoffs, NCIS: LA and NCIS: NEW ORLEANS. The potent blend of comedy, drama and likable characters make it a favorite for individual viewers and families alike.

Still, at the end of the NCIS Season 11 finale in May, things looked dire for Special Agent Leroy Jethro Gibbs, played by Mark Harmon – also an executive producer on both NCIS and NCIS: NEW ORLEANS – as he was shot twice and left bleeding out in the street.

Michael Weatherly, who has played Special Agent Anthony DiNozzo in all 281 episodes of the the CBS hit, reported to be the most successful episodic series across the globe, explains at a CBS party for the press why he thinks Gibbs will be back for Season 12.

AX: In, the season finale, it looked like there could conceivably be a shuffle in the chain of command.

MICHAEL WEATHERLY: Well, there’s no way that could happen. I think anyone who’s realistic understands Mark Harmon is the franchise.

AX: So even though he’s been going on talk shows, saying that the show is the franchise, we should not read too much into that?

WEATHERLY: Are you accusing Mark Harmon of being disingenuous [laughs]?

WEATHERLY: My interpretation of what your interpretation might be, or could be, never “should,” is almost anything can happen. But within that framework of “almost,” the one thing that can’t happen is anything to Gibbs. Because putting Gibbs in jeopardy at this stage – at the end of Season 3, we blew him up. And we worried for a moment, because at the end of Season 2, Sasha [Alexander as Caitlin Todd] blew up. She got her head blown off. So at the end of Season 3, you’re, “Okay, well, we don’t know.” But it’s been nine years. And Mark is the executive producer of NCIS: NEW ORLEANS. I kind of don’t see him go anywhere. I don’t know. Maybe I’m just a jaded, cynical TV veteran. But I think Mark Harmon is alive, well, and ready for another – I mean, Mariska Hargitay [of the even longer-running LAW & ORDER: SVU] aside, I think he’s ready to challenge whatever records are out there. Although Mariska is incredible.

AX: Too bad you can’t do a crossover, but they’re on the wrong network. But NCIS: LA crossed over with SCORPION, so apparently SCORPION is in your universe. Although having NCIS’ Abby, played by Pauley Perrette, mixed with SCORPION might be too many brilliant people at once …

WEATHERLY: Wow. Let’s just talk about Pauley Perrette for a second. How awesome is the energy of Pauley Perrette and her steadfast, almost impossible [drive to help people and animals]. She’s like Catherine Deneuve in THE HUNGER. She’s just kind of moving through a space and time that the rest of us [do not]. I’m amazed at her energy. Pauley Perrette – I mean, how many conversations does she have a week with kids? Every episode, maybe three or four? To be maybe the most important person on the show, and to be there for that little amount of time, it means that she’s so impactful. I think she has extraordinary presence. She’s vibrant.

She is the next thought she’s having. So there’s no calculated bulls*** with Pauley. Some people would call it crazy. I would say it’s the most engaged a person on our show, without question. I think Pauley is an extraordinary lady. That’s not to say that Mark doesn’t do his charities, and David McCallum [who plays coroner Ducky] is extraordinarily involved with a lot of different military things. But I think Pauley really rises head and shoulders above everyone in the amount of work that she does across the board, whether it’s animal rights or women’s rights or whatever, she’s a real signal to everybody.

AX: Do you have causes that you’re involved with in that way?

WEATHERLY: I do, but I’m much more mellow about it, because my wife is a doctor and we’re very involved in a lot of charities, but it’s a little more laid-back. Even though Pauley and I do share an enthusiasm, I don’t do it the way she does it, and I really admire the way she does it. She really puts her heart on the line and her face on the line.

It’s one of the things that makes NCIS a constant reward, because, sure, we get to entertain and we get to do this fun show every week and everything, but the great additional thing that no one saw [when it started], this hidden benefit, was all these other wonderful things that have taken place because of it. I think people are drawn together because of the show and, having just done an episode of NCIS: LA, they’re drawn together by the franchise, and I like that so much, too.

I think the franchise in general coalesces, it brings everyone together and I think it really makes people aware. I mean, I’m highly attuned to the criticisms or the snarky [magazine] reality of high-middle-lowbrow entertainment criticism, as opposed to just popular culture. I enjoy NCIS and have enjoyed it for all the different things it’s been over the years, and I think it’s really transformed and become all these different things. First it was a spinoff of JAG, then it was its own weird little thing, then it became a kind of pop cultural like, “Ahh, do we have to pay attention to that because it’s doing well? Let’s hope it goes away.” And then it didn’t go away and now it’s an institution that people now shrug off as an institution, but we were the underdog for so many years. And I think Pauley does, too. I take great pride in the fact that, first, we were pushed away because we were just like the mutt at the door. And now we’re pushed away because we’re too successful [laughs]. It’s a great problem. I call it “the Huey Lewis and the News” problem. And it’s like, “I’d rather sell eighty million records.”

AX: Isn’t NCIS said to be the biggest show on the planet?

WEATHERLY: It feels like that when you walk through an airport.

AX: Do you have a favorite episode, scene, action from this past season?

WEATHERLY: Well, I have to say, I love Mimi Rogers [who plays CIA Officer Joanna Teague], and I think the hiring of Mimi Rogers was just terrific. What a great thing. I don’t think the audience is going to quite understand it until it lands next year, but Mimi – she was great on MAD MEN, and she’s really a spark plug. And she fits in this universe so well. So my favorite thing of the year is really the advancement of [her character]. We had to lose my favorite, Matt Jones, [who played] Ned Dorneget, to get Mimi, and that was not a fair trade. He was a recurring guy for the last four years or something. He came on around the time Robert Wagner [who plays DiNozzo’s father] came in, and was a sort of comic relief for Wagner and I was trying to bribe him with food and stuff. Matt Jones is so funny. He’s on MOM [following his NCIS exit]. When he died, everyone knew he was such a set-up, and he was such a red-shirt thing, he was such the crew member, like Sam Rockwell in GALAXY QUEST. Dorneget’s death is a red-shirt death, STAR TREK-wise, but I think that even though people knew it was coming, it still had this impact.

AX: What would you most like people to know about NCIS right now?

WEATHERLY: I think everyone needs to play a little closer attention to Bishop [played by Emily Wickersham]. I love Emily and I love what [show runner/executive producer] Gary [Glasberg] has in mind for Emily.