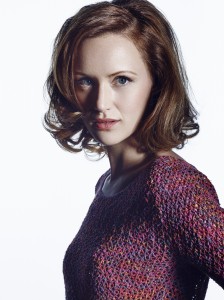 If Bishe and McNairy look like they belong together as a couple, that’s already occurred to others – the two actors were previously cast as real-life husband and wife Joe and Kathy Stafford in the Best Picture Oscar winner ARGO. McNairy, a native Texan, also starred in the inventive low-budget MONSTERS, with other credits that include NON-STOP, 12 YEARS A SLAVE and GONE GIRL. Bishe was a regular on SCRUBS, with feature gigs that encompass GRAND PIANO and Kevin Smith’s RED STATE.

Seated in a restaurant booth at the Langham-Huntington Hotel during AMC’s portion of the Television Critics Association press tour, Bishe and McNairy talk about playing a couple for the second time, as well as the HALT AND CATCH FIRE cast’s unusual rehearsal process and more.

SCOOT McNAIRY: Yes. In ARGO [which takes place in 1979], we played a married couple with completely different backdrops of characters and different scenarios and situations that we were going through, but there’s definitely a dynamic and a chemistry there that worked well. So we were really excited to come back and be able work together again.

KERRY BISHE: I just keep hoping that maybe one day we’ll make it to the Nineties.

AX: Do you know if you were cast together as a couple – that is, had anybody in the casting process seen you together in ARGO – or how did that work?

BISHE: It was just a happy coincidence.

AX: Can you contrast playing a married couple in ARGO and then in HALT AND CATCH FIRE?

McNAIRY: The situations and the scenario on the previous project that we worked together on, ARGO – totally, completely different situation. There was a life and death element there that was constantly oozing into a lot of the work that we did. Not that we’re [not] creating drama on the show, but it feels like the dynamics of this relationship is more to make this relationship work. And [Gordon and Donna] really, really fight to make this relationship work, whereas I feel like previously the characters and the situations that we were in when we worked together last was more focused on …

BISHE: [completing the sentence] … The exterior conflict that they had gotten themselves into.

McNAIRY: Yes. For Joe Stafford, he felt awful for the position that he has put his wife in and he feels responsible for it and therefore his main objective and goal is to get her out safely. And that’s a huge, huge weight to put on someone’s shoulders. 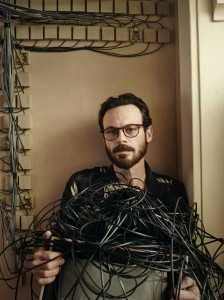 McNAIRY: And they know they’re good at what they do.

BISHE: I think that Mackenzie and I have a quality that we share with our characters, in that we think of ourselves as people before we think of ourselves as women, and I think that we’re in a situation in 1985 where the circumstances might not let us just behave as people. I think it takes them as women first, but I don’t think they treat themselves or each other that way.

AX: Cameron pretty clearly sees herself as a separate individual from everybody around her, but Donna has, at least externally when we first meet her, taken on the role of wife and mother. She’s not entirely happy about it, but she is living with that expectation. How does Donna feel about all of that when we come back to her in 1985?

BISHE: Well, it’s nice to think that we’re all looking deep into the past. It’s nice to think that this is a quaint, decades-removed sort of situation, but I think women still working in the world are trying to negotiate the balance between their work and their relationships and their families and it’s still a really sticky territory. I read an article recently about housework – there’s all kinds – and that childcare has become a lot more equitable, [men spend more] hours doing childcare, but in thirty or forty years or something, the amount of housework that men do, the amount of time they spend doing housework, has not increased at all [laughs]. So there are still some inequalities today that we have to think about. So I guess that’s to say I don’t spend a lot of time thinking about 1985. I look at the words on the page and the situations the characters are in and kind of think just, “What would I do?”

AX: How it is playing off of Lee Pace as Joe, doing scenes where your characters never know whether or how much to believe what his character is saying?

McNAIRY: Well, I think Lee as a person has a lot of mystery to him, as well as the character Joe, and I think that that’s something he does an incredible job at bringing to the character and exposing himself, on top of the fact that he’s an incredibly talented actor.

BISHE: It’s really amazing to watch him work. We get together on the weekends, [the HALT AND CATCH FIRE] actors, on every Sunday, we try and get together go over the work for the coming week, and it’s really lucky to have such a group of committed actors who want to come in on their day off to do that. One of the things that Lee does really well is, he loves and believes in his character a thousand percent. He would defend [Joe] tooth and nail.

McNAIRY: He loves his character. [When Joe’s behavior was questioned], he was like, “No, that’s the way he is.” The whole group would be like, “Lee, or Joe, whatever you want me to call you, it’s not that way.” And he truly believes it.

BISHE: Yeah. He’ll really get a hundred percent behind Joe’s actions. So he’s really good at convincing himself that this is a righteous act, that this is what needs to happen. He needs to lie and manipulate these people, because he’s got a bigger picture of success in mind for all of us.

AX: How did it come about that you all get together on Sundays to discuss the scripts?

McNAIRY: I think at the beginning of Season 1, we were searching for answers of clarity on what this story was and really get our hands on who these characters were, and unfortunately, the writers’ room could only lead us into information that was in stone, that was rock-solid. And for us as actors, we felt very naked not knowing those things, and we took it upon ourselves to say, “Hey, let’s get together and read through this.” The read-throughs turned into think tanks, and the think tanks turned into long, long discussions. It was so beneficial for me to hear [the other actors’] views and their ideas about my character, that shed light on some of the things that I didn’t see. It just became a thing that we did every week and it was incredibly beneficial to the work that we put down last season.

BISHE: It can be kind of a bummer to move away from your home for a third of the year for your job, but I think one of the things that we really kind of benefit from being in Atlanta, really everybody is outside their life a little bit, [so] we are entirely subsumed by this show when we’re there.

AX: On MONSTERS, for nearly all of it, you were one of only two actors carrying an entire ninety-minute movie out in the middle of nowhere. How was that?

McNAIRY: I had more fun on that job, but – I don’t really look at [various characters] that way. I do dissect an overall arc for a character, but so much of my work just comes from constant thinking [about] and manifesting the thought process of a character.

AX: What would you most like to say about HALT AND CATCH FIRE Season 2?

McNAIRY: I’m incredibly excited about it. I think it’s an amazing opportunity to be able to do an amount of work and then have the opportunity to come back and revisit it. And for me personally, as an artist and an actor, that’s one of the things I’m most excited about, to see where this next season goes.

BISHE: I think these are all really clearly-defined and distinct characters, and in Season 2, we have this opportunity to throw them into some different scenarios together, and I’m really excited to see what happens in those relationships – where the contentious points are, and what they learn from each other.