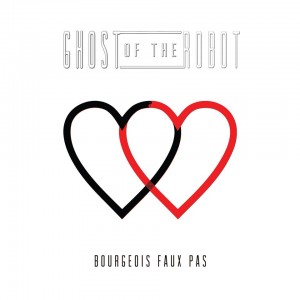 In Part 2 of our exclusive interview with the band Ghost of the Robot – Charlie De Mars, James Marsters, Sullivan Marsters and Kevin McPherson – talk more about their new album BOURGEOIS FAUX PAS, which went on sale via the band’s website September 19, as well as songwriting, feeling like R2-D2, the Internet and more.

ASSIGNMENT X: Can you talk about your roles within the band, how they’ve changed or stayed the same?

JAMES MARSTERS: I’m writing more songs that are on the album. On the first album, I had written two songs. On the second album, I had more, and I’ve got more now. So I think I’m just coming a little more online with writing.

CHARLIE DE MARS: It’s been pretty consistent. We’ve been the same kind of machinery for the last however long we’ve been together and –

CHARLIE DE MARS: I do that more now. I sang a little before, I’m singing more songs on the record which opinionated fans say is a bad idea. We generally all play the same instruments [as before]. When we’re in the studio, we kind of mix it up – everyone does percussion, back-up, whatever the song calls for.

CHARLIE DE MARS: And my other personalities thank you.

KEVIN McPHERSON: On a daily basis. And it’s very important. One of the most exciting things about this band to me is being able to see how the landscape changes, not only in the music industry, but just direct-to-consumer commerce in the past fifteen years, while the band has been around, has gone from zero to a thousand. And we’ve been able to adapt well to it. Obviously, every day we’re learning, but a lot of that is definitely thanks to Charlie’s efforts.

CHARLIE DE MARS: [to McPherson] But how has your role in the band changed you?

KEVIN McPHERSON: My role in the band has changed in that –

KEVIN McPHERSON: My hair has gotten grayer – oh, you said “better” [laughs]. Obviously, I’ve learned a lot by performing with other artists and being here in L.A. trying to make sense of the music business. I take whatever I learn from those experiences and try to apply them to what we’re doing so that we can, as I said before, keep doing this. The goal is to just keep being able to make music with friends and do stuff on our own terms, and then we can be proud of it.

SULLIVAN MARSTERS: Definitely, roles changed a lot for me. A lot changes in anybody’s life from fourteen to nineteen, so starting out just playing guitar. Now I’m singing and writing songs. Seeing the behind-the-scenes business stuff with Charlie has been super-interesting, and I’ve just been thankful that I’ve had this band to introduce me to that world, because it’s just a wonderful, very secure introduction to an industry that can be much more rough for some people. This band has just helped me grow as a musician so much, because it gives me that outlet. Because I have it, I’m able to write songs, express myself, record and learn how to do all of those things. Charlie is a great teacher of everything.

AX: For the songwriting members of the group, can you talk about how you write?

CHARLIE DE MARS: We’ve all written together and apart, for love and broken hearts. Creation is the path chosen through multi-verses, versus knowing each individual song can go in any particular direction, but it’s the idea that we all want to finish it, that we all have to come together and go, “What’s going to happen, what are we doing, can you do this, how are we going to finish it and have it be something that we want to listen to?” Lyrics change while recording, solos change. Right before the album was done, Sullivan [said], “I need to redo this solo, just one more crack at it,” even though it was thought to be done. I like knowing that nothing is ever truly finished.

JAMES MARSTERS: Charlie and Sullivan are really coming strongly into each other’s songs. For me, sometimes the lyrics come first, sometimes the chorus, sometimes the verse comes first, sometimes it’s just a melody in my head that I don’t have any words for or, words that I have no music for, it’s just a germ that starts somewhere and then you have to chase the ghost through the fog, I say. You know the ghost is there, but it’s lost in the fog and you’re reaching for it, and when you finally get it, you’re like, “That’s what it was the whole time.” But sometimes you lose it, and then you have to find it again. It’s a weird experience.

SULLIVAN MARSTERS: I think that this is a really hard question for musicians to answer. I don’t think anyone ever gives a straightforward answer, but I’ll do my best. Writing music is an advanced coping mechanism. When you feel strong emotion, the only thing you can do is hear some melody that pops into your head and write it as a form of distraction and expression at the same time. For me, it’s always melody first, usually a chord progression, then I figure out a melody. As far as collaboration, I think there are two pretty good examples for this album of the ways it can go. “Mother of Peril” was something I wrote when I was twelve, and then I brought it to Charlie a couple years ago, we restructured it a little and wrote a melody and some lyrics and an outro, and that’s happened a lot with some of the older songs.

CHARLIE DE MARS: “Why Do We Love?” I started writing near the end of my ascetic journey and then when I got back, we actually sat down with the intention of finishing it together like John [Lennon] and Paul [McCartney]. It wasn’t like one of us wrote it and then brought it to somebody else, we wanted the song itself to be the answer to the question the title proposed.

KEVIN McPHERSON: If people come to a record with different ideas and stuff that they’re passionate about, then those who aren’t writers kind of put on a producer hat, our engineer Joe [Johnston] as well, and we think, “What does this song need? What serves this song? How do we get the most out of this?” On this record, for Sullivan’s song “Back to Act Too,” we brought in a very talented auxiliary musician to play saxophones, Levi Saelua, from Sacramento. I found him through my old high school jazz band. He was great and it ended up being this really fun moment, not only in the studio, but on the song as well. And two other songs, we had a really good friend, talented vocalist Joanne Highland, sing harmony with the lead vocal, and it’s beautiful. So we all just say, “What does this mean? How can we make this better, how can we make this more unique, and always serve the song?” That is the mantra – aside from cellphone, keys, wallet.

JAMES MARSTERS: Great example of that was “All That She Wanted,” which I wrote, which was a very simple but too-short song. Kevin completely opened it up and messed with the structure of it and expanded it so that it would be a complete experience. If he hadn’t done that, it probably wouldn’t have made the album. It’s one of my favorite songs that I’ve written.

It’s kind of hard for artists to talk intellectually about their work, because, just speaking personally, I’m trying to get past my intellectual mind to let what I call the deeper voices speak. I think the frontal lobes of what we consider intelligence are only a thin film on our real brains, and I think that we fool ourselves into thinking that our best stuff comes from that thin film. Sometimes, artistically, the best stuff is a synthesis of past experience, emotion, lizard-brain stuff, and if you can synthesize all that and have it come together into one piece, sometimes you can say things that will resonate with an audience and that are more universal than if you intellectually put it together. So if you’ve been able to do that, and you’ve been able to chase that ghost through the fog and you’ve found that ghost, sometimes it’s hard to actually describe what it is [laughs]. And so I think a lot of artists kind of blanch at trying to intellectualize their work.

AX: Is that the Ghost of the Robot that you’re chasing?

JAMES MARSTERS: Way back before there was a band, Charlie and I were just two guys sittin’ on a stoop step playing guitars, listening to each other’s songs, and storied pasts when we decided to form a band, we were thinking about, “What is the name?” We were trying to think of, what are central images for your life right now, and I said, “Mine is the Tin Man from THE WIZARD OF OZ,” because I was in a TV show that was so popular that I was becoming kind of famous, and I was of the opinion that fame was toxic to the human soul and that I was in danger of losing my soul in the face of this experience, and I was afraid that I was becoming hollow as a human being and that I was losing my heart. And Charlie got excited, and he said, “Oh, I feel like a robot programmed by existence! I feel like R2-D2 going on the rocky desert [L.A.], barely able to negotiate the rocky terrain, and then a woman, who is a pterodactyl, swoops down and picks me up and takes me to the heights of heights, and it’s wonderful, and I can see the horizon and it’s a beautiful, wonderful experience, and then she drops me back down to earth with no shoot and I have to pick my little robot self up and dust off and continue down the rocky terrain. And so we started fiddling around with “Tin Man,” “Robot,” “Heart,” Ghost,” and kind of kept going to that until we got it.

CHARLIE DE MARS: It was Robot Ghost, and then –

JAMES MARSTERS: Yeah. The original thing was Robot Ghost, which was your idea, and then I just switched it for a rhythmic thing.