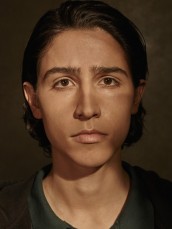 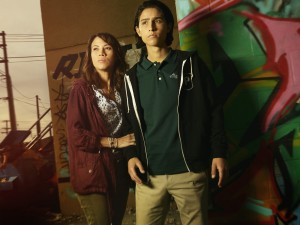 In AMC’s FEAR THE WALKING DEAD, Sundays at 9 PM, Lorenzo James Henrie plays Los Angeles teen Chris Manawa. Chris lives with his divorced mother Liza, played by Elizabeth Rodriguez. He’s so angry at his father Travis, played by Cliff Curtis, for living with another woman that he’s initially reckless when the city is hit by a wave of “civic unrest” (the audience knows what it really is, but at first the characters don’t).

Henrie, a native of Arizona, has some previous genre credits, including playing “Vulcan Bully” in the 2009 STAR TREK feature. He also had an arc on 7TH HEAVEN and stars in the upcoming film WARRIOR ROAD.

ASSIGNMENT X: Did you have any fondness for the horror genre before you got involved in FEAR THE WALKING DEAD, or was this just like, “Okay, cool acting gig”?

LORENZO JAMES HENRIE: I think it’s a little bit of both. I love acting, so this was a cool piece for me to explore in a genre that I never really have explored, and with the family dynamic and the family story, it really settled in and hit home for me.

AX: How is it playing within the dynamic of, Chris wants his father back home, but he’s irate that Travis is not there?

HENRIE: I think that’s the journey of Season 1, that you’re going to have to watch Chris and his dynamic with his father, with Travis. He’s obviously a kid who’s very wounded and resentful towards his father. He’s a product of a divorced family, and it’s that balance of, “Okay, the zombie apocalypse is happening, how do I maintain being a sixteen-year-old, being wounded from my father, but also healing that wound through this journey?”

AX: How are you enjoying working with Cliff Curtis and Elizabeth Rodriguez, who play Chris’ parents?

HENRIE: They’re the most amazing people. They are two people who I look up to, and I’m learning a lot from them.

AX: What’s the coolest physical thing you’ve gotten to do on the show so far?

HENRIE: The coolest physical thing? You’ll have to find out. I don’t want to reveal anything.

AX: And what would you most like people to know right now about FEAR THE WALKING DEAD?

HENRIE: That it’s completely separate and different from THE WALKING DEAD. It’s a storyline that you don’t even need to watch THE WALKING DEAD to understand, and it’s just good story, it’s good drama, and you see these two families that are broken and they come together for the first time.

This interview was conducted during AMC’s portion of the Television Critics Association summer press tour at the Beverly Hilton Hotel.