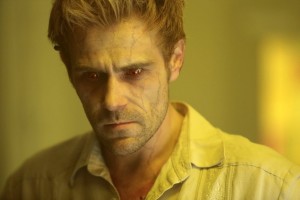 In NBC’s CONSTANTINE, Fridays at 10 PM, Matt Ryan plays the title character from the HELLBLAZER comics, an antihero with a damned soul who fights demons and hopes for redemption.

Executive producer and showrunner Daniel Cerone developed CONSTANTINE for television with fellow exec producer David S. Goyer. Cerone, who has also been a writer/producer on MOTIVE, THE MENTALIST, DEXTER and CHARMED, to name a few credits, is happy to talk about his work in the hell-blazing field.

ASSIGNMENT X: You’re on right after GRIMM, a show that also deals with monsters and people who combat them. How does that work for CONSTANTINE?

CERONE: GRIMM is fantastic for us. That’s the bottom line. Because obviously, they are both horror-based shows. Constantine is all humanity, he’s all heart, he’s all broken hero and completely fallible and acknowledges his own mistakes. So we’re excited that we can still be dark and edgy and scary – that’s our goal – but at the end of the day, we’re telling human stories. And as we break our stories, we break emotional arcs along with our stories. So we want to do the scares, but we want to do it with feeling aspects, too, more full-bodied, more well-rounded.

AX: Lucy Griffiths’ character Liv was originally supposed to be a series regular, and then it wound up that Constantine sent her away. Do you know if you’ll bring her back at some point?

CERONE: There are currently no plans to bring her back.

AX: How do you balance the series’ tone? Do you have to work scene by scene and go, “Is he being too smart-ass here?” “Is he taking this too seriously?” Is that an ongoing concern?

CERONE: Yeah. In the comic books, he’s a very smartass character and downright unlikable at times. We have to toe that line. Because at the end of the day, we do want someone that people are going to root for, so we’re trying to be as honest as we can to the roots of the character in terms of making him snarky. But yeah, we do have to keep an eye on it, because at the end of the day, he’s a hero we have to root for. And also, when somebody’s constantly being sarcastic and constantly being flippant, it takes some of the reality out of the scene and it takes the stakes out of the scene, so the more real we play him, the more real the scares are going to be, and at the end of the day, we want a scary show.

AX: Even though CONSTANTINE as a comic book existed before BUFFY THE VAMPIRE SLAYER existed as a TV series, are you aware of the similarities between Constantine and Spike?

CERONE: Oh, yeah. James Marsters in the day would’ve been a great Constantine. He’s a little older now. It is similar. But what I’d ask Joss Whedon is if Joss Whedon was aware of it before he created Spike?

CERONE: Yeah. We want to make a scary show. We are designing and crafting set pieces and suspense sequences to be as scary as possible. Because that’s what we miss on television, are scares. So that is a goal for us.

CD Review: Van Halen - A DIFFERENT KIND OF TRUTH
Exclusive Photos from the 3rd Annual STREAMY AWARDS
TV Review: BONES – Season 10 – “The 200th in the 10th”
Movie/TV Review: INTO THE DARK: THE BODY