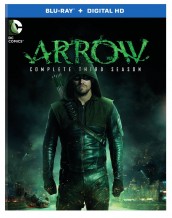 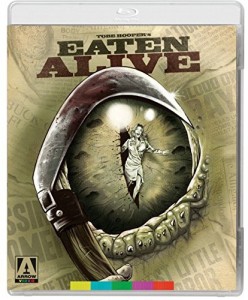 EATEN ALIVE – The cult classic from Tobe Hooper begins with the infamous line from a very young Robert Englund saying “Name’s Buck and I’m ready to f***.” This is the first time the notorious EATEN ALIVE is being offered in high definition and is the second film this week from Arrow Video that hasn’t just gotten hold of a slew of eurotrash films but some really cool horror titles too. This is a bit of an odd duck because it centers on a crazy hotel owner that has a pet alligator that if you piss him off, he decides to feed you to it. Of course, the hotel owner’s elevator doesn’t rise all the way to the top and he tries to rape a chick, who decides that’s not a good idea. The result? Yep, fed to an alligator. A dude doesn’t like that the alligator ate his kid’s dog … yep, fed to an alligator. You get the idea. So it gets a bit repetitive but still is enjoyable because it is so over-the-top to the point of hilarity, even if unintentional. People who have pined to have this finally available on Blu-ray, fret no more as it is here. 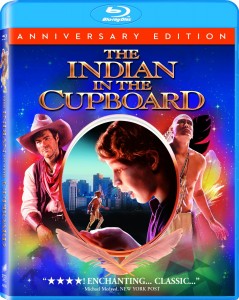 THE INDIAN IN THE CUPBOARD | © 2015 Sony Pictures Home Entertainment

JUMANJI/THE INDIAN IN THE CUPBOARD/ZATHURA – How cool is this? Three of the great youth action flicks finally coming to high definition for the first time for their 20th anniversaries (10th anniversary for ZATHURA). All three of these movies involve kids getting wrapped up in some sort of crazy circumstance after messing with some supernatural object. JUMANJI and ZATHURA deals with a board game that transports the kids to crazy mythical lands where they must keep playing the game in order to be safe. Unfortunately, that involves greater and greater danger. THE INDIAN IN THE CUPBOARD deals with a 9 year old getting a wooden cupboard that contains toy figurines that get brought to life. The cool thing about these films is that not only are they excellent for kids but they can be equally enjoyed by adults. And with so many crazy special effects in each film, they were born for Blu-ray, which you can now enjoy them in that format. 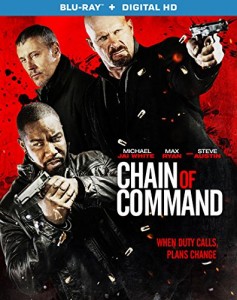 CHAIN OF COMMAND – A decent enough action flick with Michael J. White and Steve Austin in the starring roles as good guy and bad guy, respectively. White plays an ex-special ops that returns home from duty only to see his brother murdered. He begins to hunt for the killers and gets caught up in a web of conspiracy and corruption. Later, an assassin (Austin) begins to hunt him and they begin a game of cat and mouse with White’s character trying to take down high-ranking officials and stay alive. It is your typical straight-to-video action flick with some really bad acting but the action itself isn’t all that bad considering and white does a good job and Austin is, well, Austin and you really can’t go wrong with him in a role as a tough guy. 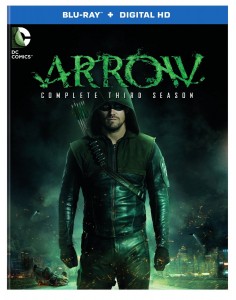 ARROW: THE COMPLETE THIRD SEASON – In the upcoming fourth season of ARROW, Oliver Queen (Stephen Amell) is once again getting a new outfit this time with more armor and more like what we have seen in the comic book versions. In Season 3, Arrow faces off against numerous bad guys that have come together in order to ruin everything he has come to gain. Luckily, on his side is Team Arrow, which has grown in to a power force but with a number of issues that is putting them at odds with each other. With a crossover with THE FLASH and a lot of cool action episodes, they have really taken this show in the right direction and in Season 4 we are probably going to get more of the same with more villains, more action and more drama (but good drama). If you missed out on the third season this is a great chance to catch up before the Season 4 premiere kicks off this fall. 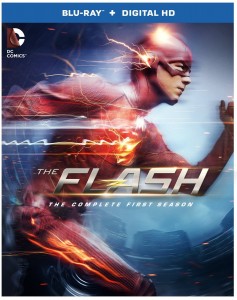 THE FLASH: THE COMPLETE FIRST SEASON – Word on the street is that in Season 2, The Flash gets a costume that is more like what we have become accustomed to in the comics. Where ever you fall in this argument that he should have been there from the start, it is indeed happening as well as we are going to get a host of new bad guys to battle against along with hopefully some more mythology that builds toward another crossover with ARROW. During the first season of the show, it began with our introduction to Barry Allen (Grant Gustin) and a story involving the death of his mother and the incarceration of his father. Initially Allen thinks he’s the only metahuman alive but quickly finds out that there are plenty of others that have powers. The CW has done a great job with these superhero television shows since the beginning with SMALLVILLE and later with ARROW and now with THE FLASH (and future shows that are also going to be introduced this season). With Season 2 coming soon, now is a good time to catch up on what you missed.