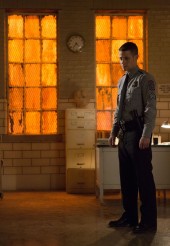 The actor chats about anchoring the pre-Batman series 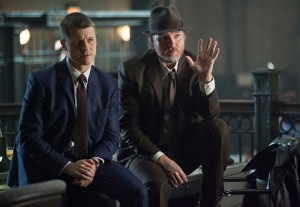 Fox’s Monday-night hit GOTHAM, developed by executive producer Bruno Heller from the DC Comics BATMAN series, tells the story of that legendary metropolis before Bruce Wayne became the Caped Crusader. Bruce Wayne, played by David Mazouz, is a preteen, orphaned when his parents are murdered in front of him at the beginning of the series. We see him developing the traits that will one day allow Bruce to be Batman, but GOTHAM centers on another crime fighter, Gotham City Police Department’s detective James Gordon, played by Ben McKenzie. Gordon, new to Gotham believes in justice and doing the right thing. To his dismay, he finds he is just about the only adult in the city who does, though he’s slowly bringing his deeply cynical and moderately corrupt partner Harvey Bullock (Donal Logue) around.

McKenzie, born Benjamin McKenzie Schenkkan – the playwright Robert Schenkkan is his uncle – in Austin, Texas, actually came to GOTHAM after spending five years as lawman Ben Sherman on the acclaimed and very realistic police drama SOUTHLAND. During that time, McKenzie voiced Bruce Wayne/Batman in 2011’s animated BATMAN: YEAR ONE. Other previous gigs include the award-winning independent feature film JUNEBUG being a regular on THE O.C.

When Fox throws an afternoon reception for the GOTHAM cast and the Television Critics Association at Pasadena’s Langham-Hilton Hotel, McKenzie takes some time to discuss all things James Gordon.

For starters, McKenzie says he had no hesitation about going from playing one police role on SOUTHLAND to another on GOTHAM. “That wasn’t a concern. These worlds are so different that I did not feel like it would be limiting in that way. The concern was always, and what I always talk about, is how to do this in a way that is unique in the world of these quote-unquote superhero shows that’s character-driven, that’s a show that I want to be a part of. Bruno and I had the luxury of working together the year before on a pilot for CBS [THE ADVOCATES] that didn’t work, so we liked each other and we trusted each other and I think that was really key to me wanting to do it.”

A big part of Gordon’s life is his day to day relationship with his detective partner Harvey, which has gone through a number of shifts during GOTHAM’s first season. “We’re trying not to make it too easy,” McKenzie explains. “We’re trying to play it as realistic as possible The reality of this ought to be, Bullock really has done some bad things, and he really has, by the time he meets Jim, pretty much given up on a notion of goodness or even trying for goodness, striving for goodness, in the police department. So the breath of fresh air that Jim breathes into him reinvigorates him, but it doesn’t change fundamentally who he is. He needs to be checked by Gordon constantly. And he’ll slide.”

McKenzie adds that playing opposite Logue aids him in playing Gordon. “I think he helps me discover the humor.”

As for what working with McKenzie does for Logue, McKenzie says that’s for Logue to say, but he opines, “I think Jim helps Harvey discover the romanticism of doing something good, the romanticism of heroism, the notion that it’s okay. Sometimes you need to just barrel in, even at the risk of your own life, and do what’s right.”

Within the show, Gordon is a trusted protector to young Bruce. In reality, how is it for McKenzie playing off Mazouz, who is still in his formative years as an actor? “The thing about David,” McKenzie employs the correct pronunciation of Mazouz’s first name, which is Da-VEED, “is that he’s extraordinarily mature. He’s very mature for a young man of his age. And he’s also very good as an actor – smart, he listens. It’s been a joy. It’s extraordinarily difficult to cast that part, and the fact that they’ve ended up with an actor like David is a blessing, because I think that could have gone wrong in all sorts of ways, and it hasn’t. He is the perfect guy to be Bruce at the age at which we find him, which is really in the eyes. Does this young man wear the weight of the world on his shoulders? And he does. Just in his eyes. You can see it. He looks like a very, very old soul.”

Then there’s the unsettling association between Gordon and Oswald Cobblepot, aka the Penguin, played by Robin Lord Taylor. Oswald has correctly pegged Gordon as someone who can always be trusted to do the right thing – which includes sparing Oswald’s life at great risk to his own. Consequently, Oswald insists that they’re friends, which is just about the last thing Gordon wants, but there’s no denying their fates are bound together in a peculiar way.

Does McKenzie think that Oswald perhaps has an unstated crush on Jim Gordon? “Maybe, although I don’t think – that’s not what bothers Jim. It’s more what he’s going to owe him if he needs a favor.”

There are no hesitations, however, in McKenzie’s attitude toward working with Taylor. “He’s wonderful,” McKenzie enthuses. “We just like each other and enjoy it and talk about whatever we want to talk about in terms of fixing the scenes or making adjustments. It’s easy.”

Romance for someone like Gordon is tricky, partly because he’s usually in danger and partly because he can never tell an outsider all that’s happening. His girlfriend Barbara Kean, played by Erin Richards, left him because she felt he’d never totally confide in her. Currently, Jim is dating Gotham City Police Department’s new coroner, Dr. Lesley “Lee” Thompkins, played by Morena Baccarin.

Has moving on been guiltless for Gordon, since we know Barbara has been unfaithful to him? “All he knows right now is that she left him,” McKenzie replies. “He’s not aware that she’s unfaithful, but the audience knows, obviously. She just left with a note. She just wrote him a Dear John and left him alone, and I think whether he’s ready for a relationship or not, he needs it. He’s so lonely and I think there is such a burden on him, dealing with what he’s dealing with at work, that he needs some solace. And a kindred spirit like Dr. Thompkins is the perfect person for him to confide in and respect and ultimately more.”

A number of McKenzie’s fellow actors have said that he’s a leader on set and establishes the tone. Does McKenzie feel this is what he’s doing and, if so, how does he feel about it? 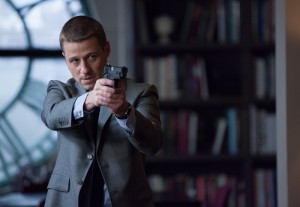 “It’s something I felt was incumbent upon me,” McKenzie says. “I’ve been on enough shows to know that when you are at the top of it, number one on the call sheet, like I am for the first time on this show – I’ve been on other shows, but I’ve never had that position – particularly when I’m on a show like this, which is so centered around Jim Gordon’s experience, you really need to create an environment, along with Bruno and [executive producer/director] Danny [Cannon], of mutual respect, trust, creativity, collaboration and we’re blessed with the kind of actors that have joined on. Robin and Donal and Jada [Pinkett-Smith, who plays gangster Fish Mooney] and the list goes on and on. But it’s a responsibility. Otherwise, shows that are this big particularly, can kind of fracture and people can feel like they’re making their own little thing within it, but there’s no sense of camaraderie. So yeah, I take that very seriously.”

Does that responsibility help McKenzie in giving Gordon his backbone? “Yes. They’re similar in that way, right? Gordon has to lead a bunch of people, drag them in a way, from the darkness to the light, in the GCPD and outside of it, because he’s one of the few moral men left in a city that’s completely fallen. Thankfully, I’m working with much better people in my real life,” McKenzie laughs. “But you do need to lead, because a show like this is big, and it needs people to go, ‘No, no, we’re doing this, we’re not doing that.’ It starts with Bruno and Danny and then it filters down to me when we’re on set.”

How does McKenzie feel about the way SOUTHLAND ended? “It was the way that SOUTHLAND always was. It was always a fight to get it done, it was always a beautiful team at the heart of it and a group of people that would have literally shed blood in order to get it done, and it was never going to come easy, so it ended the way it always was, which was a fight. And I’m extraordinarily proud of it, and we left our blood, sweat and tears on the mat.”

Does GOTHAM feel a little less metaphorically bloody in terms of simply getting the episodes in the can? McKenzie smiles. “It’s a little bit more ‘cush,’ but that’s alright.”

GOTHAM is visually spectacular. Is there a great deal of CGI enhancement? McKenzie says that there is some work with green screen for background plates, but, “It’s not like acting to a tennis ball – we don’t add in monsters, for the most part. it’s more plates and things like that. It actually doesn’t affect our process as much as [it affects] production.”

A few hours before this interview, Fox announced that GOTHAM had been picked up for a second season. Were the actors privy to this information earlier? McKenzie says no. “We hoped – you always hope when you come here for the TCA [Television Critics Association press tour] and you’re flown in from New York [where GOTHAM is produced], but we had no idea. We knew five minutes before you guys did.”

The renewal wasn’t exactly a surprise, McKenzie acknowledges. “I think in terms of the numbers, as I understand them, we do very well. Creatively, I truly believe – I’m very proud of the first half – and in the second half, it gets better and better and better and we just keep working at it.”