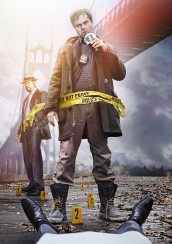 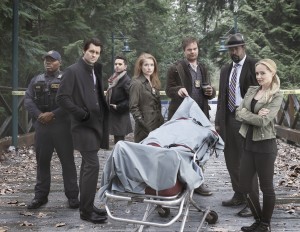 Kevin Hooks, another of BACKSTROM’s executive producers, directed the pilot and helps set the tone with the directors of subsequent episodes. Hooks, a native of Philadelphia, began his career as a child actor in the title role of the 1969 telefilm J.T. His first directorial work was on the TV series ST. ELSEWHERE in 1983 and he’s since worked on a wide variety of films and TV, including Hanson’s BONES and, this season, SCORPION and AGENTS OF SHIELD.

ASSIGNMENT X: What appeals to you about BACKSTROM?

KEVIN HOOKS: I think that I spent so many years on PRISON BREAK and, prior to that doing intense dramas like 24, ALIAS, LOST, that when Hart called me and asked me if I would do first BONES and then FINDER, and this is the third show I’ve done for him, [its relative lightness was appealing]. First of all, it’s a way of looking at the world through a fairly comic lens and I tend to think I have a sense of humor. It’s another angle to get at subject matter through laughter and humor and still explore personalities, whether they be flawed or otherwise. And I think Hart’s really good at that. And I like how he builds relationships, I like how he builds protagonists that are flawed but at the same time have a view of the world that allows them to laugh at it a little bit. I think BACKSTROM really is the epitome of that, because he sees so little good in what is around him that he just has to dig himself out of a hole every morning that he gets up. But he does find a way to use that to work on himself, and I think that’s something that, particularly in this genre but more specifically what Hart Hanson does in this genre, that appeals to me.

AX: Backstrom sometimes says things that could be construed as sexist, racist and/or homophobic. How do you balance creating sympathy for him and validation of his intelligence without validating the behavior?

HOOKS: Well, I think that when you talk about validating behavior, there are a couple of different ways that we evaluate that kind of thing. I think that as much as we have gone out on a limb to interpret this guy Backstrom from the books, we also go to great lengths to see the vulnerability and to peel the onion back and see that this is a genius, but underneath that, this is a human being who’s deeply flawed and who is searching to find his true self. And we see that week in and week out. And so I think that if the audience is patient enough, they will see a very realistic portrayal of a deeply flawed human being who’s trying to better himself.

HOOKS: First of all, as I talked about, this genre is something that I really enjoy, because it’s giving me an opportunity to approach issues and personalities in a much different way. But that being said, I have to tell you that working with a cast like this, led by the amazingly talented Rainn Wilson, who surprises me day in and day out with the depth of his technique and his performance in this show as Backstrom, it just to me has been the most gratifying thing of all. The cast is tremendous and, as I said, a lot of them have done comedy, and as we talk about our trepidation with regard to the character and some of the writing of the character, I think that I can’t imagine any other actor more qualified to tackle that conflict than Rainn Wilson.

This interview was conducted at Fox network’s party for the Television Critics Association at Pasadena’s Langham-Huntington Hotel.

Exclusive Photos from the ROCK OF AGES World Premiere
CD Review: HOOSIERS soundtrack
Dorking Out - Episode 37: The Get Out, Logan Edition
Movie Review: A DEADLY LEGEND