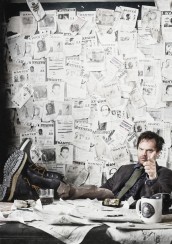 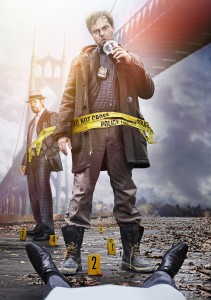 Hanson also adapted another series of novels, Kathy Reichs’ mysteries, into Fox’s BONES, now in its tenth season, which follows the crime-solving adventures of forensic anthropologist Dr. Temperance Brennan (Emily Deschanel) and her FBI agent husband Seeley Booth (David Boreanaz). Hanson talks about the differences between the two series, as well as the balancing act of making Backstrom simultaneously misanthropic and sympathetic.

ASSIGNMENT X: You’ve got two procedural series on the air right now. Do you have to work on ways to make the procedural elements different from one to the other, or does that just come naturally?

HART HANSON: No. In fact, I’m sure that there will be people who point out that BACKSTROM could not be further away from BONES. We actually make fun of forensics, because what I found out when I was researching BONES was that police don’t care about forensics at all. Lawyers do, because forensics help sway a jury, but [police generally] don’t use forensics. Fingerprints are never there, and if they are, they don’t match. And Backstrom, he hates forensics. Poor Niedermayer [Kristoffer Polaha] starts talking and Backstrom just says, “Ah, I don’t care about any of that.” So these are very much more human stories.

AX: Backstrom often expresses himself in ways that could be construed as offensive. How do you present sexism, racism and homophobia in a character who’s meant to be sympathetic without validating that behavior?

HANSON: Well, that is the central question of the show. And one of the things we’ve wrestled with is – we have quite a diverse [writers’] room, for one thing, and there’s a funny thing. I would find that the Asian writer would say, “Hey, how about this joke?” And I’d go [horrified], “Oh!” And [African-American colleagues pilot director/executive producer] Kevin [Hooks]  and Page [Kennedy, who plays Officer Frank Moto] and Dennis [Haysbert, who plays Det. Sgt. John Almond] all pitch jokes where I go, “Aahh …” What we have to contend with is, we hope that none of our jokes are just there to be funny, that they happen to have some connection to the case. [Backstrom] looks at a black guy standing amongst white and Asian students and says, “That guy stands out because he looks like a raisin in a bowl of popcorn,” which is racist. But later, we find out there was something about his body language, standing away from the police, that suggests, oh, there’s another reason to suspect him. That’s what Niedermayer says. And we try and do that as much as possible. Backstrom says it in the worst possible way, but it’s not the reality of what makes someone suspicious. The guy wasn’t suspicious because he was black, he was suspicious because he was avoiding the cops, but Backstrom said it’s because he’s black, he stands out. So I always say he’s got the eye of an artist, and it bubbles up through this horrible scar tissue and comes out in the worst possible way. But it’s something we’re going to wrestle with.

AX: Do we find out why the scar tissue is there?

HANSON: Yes. There’s a reason for the way he is, and underneath all that scar tissue is a very sensitive human being who’s trying his best and that will be the journey of the series, if we do it right.