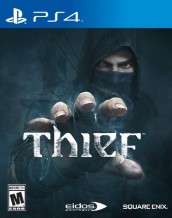 The original THIEF video game was back in a time before gamers didn’t have the attention span of a gnat. You spent numerous amounts of game play sitting in the dark just trying to figure out the pattern of guards or if there was enough light to give you away in a small corner so you could get to your objective of stealing some tiny trinket from some turn-of-the-century highbrow socialite. If you did manage to kill a guard or knock them out, you had to get rid of the evidence and quick. That meant covering the blood with water and ditching the body in a location no one would go. If you screwed up, the entire house guards would be on you in quick order.

Obviously, a game like that today wouldn’t work. Well, it would find a niche but mass market appeal wouldn’t be what a major studio would want to be successful. The modern-day THIEF is nothing like the old game. If anything, THIEF is more akin to DISHONORED, which borrowed many ideas from the original THIEF. It’s a full circle then.

You play as master thief Garrett, a notorious man and renowned for his ability to stay in the shadows. During the first mission, you accompany Erin for a heist job inside the evil Lord Baron’s estate. But when Erin gets too ambitious, she falls into some cult-like ceremony and supposedly dies. Garrett gets knocked out as well and wakes up inside a carriage being carted secretly in the city. We learn that Garrett had vanished for an entire year and then suddenly was back. Thus, begins the search for answers regarding why Garrett has a Focus power (allowing him to better see things such as loot, explorable areas and secrets), what the Baron was doing in the ceremony and who really Erin was to begin with.

Unfortunately, the plotline is thin at best. It gives a good start of mystery but it is never fully developed. Neither are the characters that Garrett comes into contact with. It is almost as if we are supposed to know who these people are already and why bother telling us anything about them.

ot surprisingly, the first few chapters are slow. No, it’s worse than that. They are painfully slow. And the whole map and travel system is extremely convoluted and tedious. At certain points you need to move into another area but there is nothing telling you this. So you run to your map pointer and it leads to a brick wall. Eventually you discover you need to traverse into a new area that needs to be loaded first usually by a glowing light or inexplicably through a window that is completely unmarked.

There are also issues with the editing of the game. Many cutscenes get ended abruptly, sometimes mid-sentence.

Most of the sidequests that are given to you by your main contact man are pointless, there is nothing that furthers any plot or any interesting RPG element here. And the plot is just there. There is not reflection about what is going on or any shock. Garrett learns he has been gone for an entire year and instead of being outraged or disgusted, he shrugs it off. At one point we see some weird non-human creatures scurrying in the dark (and there is more of this later) but Garrett doesn’t think it’s odd or has any interesting thing to say. Apparently it is normal practice. Yet, he is quick to offer quips about robbing some dude of his coin.

There could have been so much more done with this game that it makes it painful to have to point out faults where they could have been strengths. If the developers had fully embraced the RPG element, there could be sideplots that carry as strong as the main narrative. One side quest we learn that a woman had been killed and a trinket taken. Instead of following the trail of the killer, Garret just retrieves the item that was stolen in the first place and we mysterious see another man dead and his presumed wife crying over him. Yet, nothing is explained. Nothing is given as to what is even going on. We simply take the trinket and leave.

Also, the lack of having a true open world environment really hurts that game. You can do whatever you want in a given area sure, but when it comes to missions, there is a followed path or no alternative. And there simply is not enough to do in the areas where you can fully explore. There are windows to climb in and stuff to steal but nothing really fun, unless you get off on loot whoring. And the windows, oh man. Each one you have to open by button mashing, that is, unless it’s a glitchy next map area one which simply fades to black oddly.

All of that said, THIEF has lots of fun moments. The entire sequence with a haunted Asylum is damn spooky stuff with crazy visions and stuff pounding on the walls. Some of the side quests that are given to you by individuals looking to retrieve their goods also take you on some of the best heist missions. The back half of the game is also very well done with some lots of evasion or confrontation scenarios, safes to crack and large buildings to explore in order determine the overall meaning behind the storyline. Of course, this is done how you play – either by staying in the shadows to avoid guards and people, or just taking them out with arrows or other environmental hazards.

THIEF also has a cool feature that lets the player customize the game. So you could, in theory, play the game like the classic without any Focus power, map navigation or threat detectors. It’s a nice addition for a game that has so many flaws. Also there is nudity and sex, who doesn’t enjoy some animated nudity and sex?

Overall, while extremely flawed, THIEF is still an enjoyable first person stealth shooter, I just wish they could have done more to make it a great game rather than just merely OK.