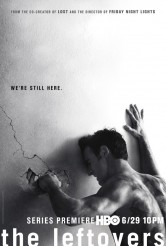 A frustrating, dark and ultimately unsatisfying look at society falling apart after a strange event 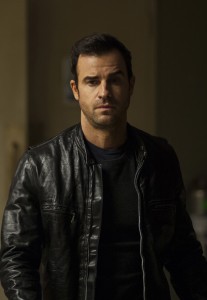 THE LEFTOVERS is another in TV’s recent fascination with genre stories that show society on the brink of extinction, aduction or tragedy and how they deal with these seen and unseen forces.

From REVOLUTION, FALLING SKIES, the TNT series THE LAST SHIP and last summer’s UNDER THE DOME, there’s a similarity in tone and execution in all these stories with their success pending on how they keep the story moving forward at a fast enough clip to keep audiences coming back week to week.

THE LEFTOVERS is on HBO and created by LOST co-creator Damon Lindelof and Tom Perrotta based on Perrotta’s novel. That means you get bad language and some harsher violence added to the mix, but the end result is pretty much the same vibe.

To its benefit, THE LEFTOVERS uses it’s pilot episode to create a rather intriguing mystery and unique structure in how it reveals just who and what this series will likely be about. And granted, the ingredients are engrossing at times, but it’s also deadly slow and incredibly dull too.

The story begins when two percent of the population mysteriously disappears. Three years later, people are picking up the pieces, but there are still no answers. Was this an act of God, were aliens responsible or was it something even more sinister? None of those questions are answered just yet (let’s hope that when the series is over, it’s not revealed that all the characters have been dead the entire time), but there are many people trying to deal with the puzzle pieces in different ways.

Kevin Garvey (Justin Theroux) is our hero, well sort of, an angry police officer trying to keep his family together despite the disappearances three years prior. His son Tom (Chris Zylka) works for a shady organization, his daughter Jill (Margaret Qualley) is volatile and rebellious and his wife we assume was part of the 5 percent that disappeared (though there is a nice twist at the end that is one of the more clever aspects of this otherwise depressing hour).

There’s also a very strange cult – one that chain smokes, wears white scrubs and never speak a word. They’re gaining recruits in some kind of Jim Jones way. Though not explicitly laid out in the pilot, it’s assumed they’re waiting to be whisked away when the next two percent or more is taken away.

There’s also the mysterious problem of stray dogs that are roaming the town. These dogs had owners prior to the mass exodus and supposedly saw their masters taken away which made them go mad. By the episode’s end, Kevin realizes the dogs may be an indication of where the human population may be heading if issues aren’t resolved soon.

Cable allows THE LEFTOVERS to take is time with its revelations and storytelling, but the series also feels so nihilistic at times, it’s incredibly depressing to watch. While I love the originality of the cult of chain smokers, the show also tests your patience with characters who you really don’t want to spend a full season with.

Thankfully, Theroux is at least tolerable as Garvey. He’s hopefully he develops into the larger voice of reason and conscience of THE LEFTOVERS.

The other hard part with THE LEFTOVERS is there are so many unanswered questions as to where it’s going, which could also be a good thing if there is a master plan at work here and an end game. The series premiere of FX”s FARGO was uneven, but also frustrating at times due to its distracting echoes of the feature film it was based on. However, after that initial awkwardness in the pilot, it hit the rest of the series on all cylinders and turned into one of the best TV series of 2014.

THE LEFTOVERS may have a few more tricks up its sleeve, but there’s no joy to it and no spark to set it apart from everything else mining the same material. And since it didn’t have a major hook by the end of the pilot to justify coming back for subsequent installments, its name itself feels rather fitting. It may look, act and feel like a brand new series, but its riddled with leftovers from far more interesting and successful series.

AGREE? DISAGREE? LEAVE A COMMENT AND LET YOUR VOICE BE HEARD!