The King is dead! Huzzah! 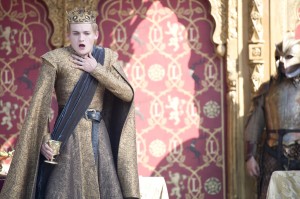 There aren’t many characters anywhere who can match up to GAME OF THRONES’ King Joffrey Baratheon in terms of being both this dimensional and this completely monstrous. The more we get to know this high-born, sadistic, mean-spirited adolescent villain, the more we hate him – and the more we applaud the writing and the performance of actor Jack Gleeson, who plays him.

“The Lion and the Rose” brings good news and bad. On the one hand, we’ll miss having such an absolute villain around, but if ever anyone deserved to die choking to death and bleeding from the eyes (and arguably, no one really does), that would be Joffrey.

This event occurs at Joffrey’s post-wedding feast, no less, after he’s just married Margaery Tyrell (Natalie Dormer). Unfortunately for Joffrey’s uncle Tyrion (Peter Dinklage), Joffrey has demanded that Tyrion serve as Joffrey’s cup bearer, and it looks as though Joffrey choked to death on the wine in the cup. Joffrey’s mother Cersei (Lena Headey) is certain her brother Tyrion has poisoned her son and orders the guards to seize him, while Cersei’s other brother Jaime (Nicolaj Coster-Waldau), who is secretly Joffrey’s actual father, is captain of the King’s Guard but can do nothing to help.

Not surprisingly, this scene is the end of the episode – the act will be followed, but the creative team sensibly decided to let the audience wait a week to recover. George R.R. Martin, author of the book series that is the basis for GAME OF THRONES, scripted “The Lion and the Rose,” and proves adroit and flexible in adapting his own work (the wedding scene in the book is equally memorable but some details are different).

The episode’s opening promises to give us a worthy contender for Joffrey’s recently vacated crown of awfulness, albeit not his royal circlet, as Ramsay Snow (Iwan Rheon) hunts down an obedient serving girl and has her torn to pieces by his dogs. Ramsay’s father, Lord Roose Bolton (Michael McElhatton), killer of Robb Stark, upbraids his bastard son for castrating hostage Theon Greyjoy (Alfie Allen). However, Bolton says that if Ramsay can take Moat Cailin from the Greyjoy forces,Boltonwill think about giving Ramsay legitimacy.

Bran Stark (Isaac Hempstead-Wright), still traveling with Hodor (Kristian Nairn) and Jojen (Thomas Sangster) and Meera Reed (Ellie Kendrick), has a vision telling them where they must go next.

Stannis Baratheon (Stephen Dillane) burns three men alive, including his brother-in-law, at the behest of R’hillor priestess Melisandre (Carice Van Houten). Davos (Liam Cunningham), Stannis’ loyal advisor, still is deeply unconvinced of the rightness of Melisandre’s beliefs. Melisandre visits with Stannis’ young daughter Shireen (Kerry Ingram), who is uncertain about her own religious beliefs, though she is skeptical about Melisandre’s assertion that the burned men are now happy in Heaven.

Tyrion, learning that Cersei and his father Tywin (Charles Dance) have been informed of the existence of his lover Shae (Sibel Kekilli), tries to force her to leave and go across theNarrowSeato Pentos. Since she simply won’t believe she’s in danger, Tyrion tells her that he regards her as a whore who cannot ever be with him. Bronn (Jerome Flynn), Tyrion’s trusted for-hire bodyguard, swears he put Shae on a ship heading to Pentos.

There are so many great moment in the episode, even though there are only a few action scenes (the hunt at the beginning, a sword practice session and a dwarf interpretation of the War of the Five Kings). Diana Rigg is splendid in every single moment as Margaery’s grandmother Lady Olenna Redwyne. Her scenes with Dance as Tywin are magnificent – the banter is so enjoyable that it even seems to draw a glimmer of warmth from the icy Tywin.

There’s also a terrific exchange between Loras Tyrell (Finn Jones) and Jaime. Poor Loras, who is gay, has been betrothed to Cersei. Jaime warns Loras that Cersei will kill him if they marry – but of course, Loras will never marry Cersei. “And neither will you,” Loras says, taking his leave.

Raving about Dinklage’s work here is getting repetitive, but he’s as brilliant as always, registering every awful thing that’s happening and calculating the response and letting us see it while keeping his face an unmoving mask as Joffrey jabs at him.

But let’s hear one last huzzah for Gleeson’s work on GAME OF THRONES, and for the entirety of Joffrey as a character. He was, in his way, a perfect creation.