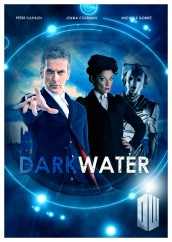 Clara goes over the edge and now we know who Missy is! 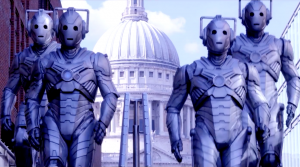 Ordinarily with my DOCTOR WHO reviews I try to avoid spoilers, but with everything that happens in “Dark Water” I really feel the need to actively discuss the major plot points that are big game changers for everyone’s favorite Timelord.

Let’s just start with Danny Pink (Sam Anderson) is dead. That’s where the episode begins and I know it’s supposed to be a huge emotional moment, but Danny just hasn’t had enough going for him to make me care that he got hit by a car.  He’s more of an irritation to me. I just have never grown to like the character. Having said that, there were a few tight-throated moments where Clara (Jenna Coleman) was mourning. That was more because I like Clara, but still at least it got some kind of emotional response out of me.

And since we’re on the subject of Clara, everyone who has had a dislike of the character up to now, probably wants her tossed into an active volcano. Clara’s resting bitch face goes complexly Dark Phoenix with the death of Danny Pink and she tries to make The Doctor (Peter Capaldi) go back and re-write time…by hurling TARIDS keys into a volcano until they are all gone. Thankfully, this turns out to be a dream state that The Doctor put her into, but wow. I think she might’ve just become one of the most loathed companions with this episode. I have enjoyed Clara, but I think she crossed a line, even if she really didn’t physically hurl the keys into a volcano; she certainly thought she was. That’s enough for me. Out the door she would go and that would be it. Of course, The Doctor being who he is decides to help her find Danny instead. He is an alien after all. If it were my call, she would have gotten the boot and a nice brochure on grief counseling.

All roads in this episode lead to 3w Corporation which happens to be run by the mysterious Missy (Michelle Gomez). There are tanks and tanks of what is called “dark water” (and we have a title) with each tank housing what appears to be an animate skeleton held together with the barest amount of tissue. What no one takes into consideration, not even The Doctor, is that the dark water only allows organic material to show. So, when the tanks drain each is revealed to be housing a Cyberman. In a sense we now have a tomb of the Cybermen on Earth! Bad news for everyone. Plus, all of the (I’m assuming recently deceased) graves are getting ready to vomit forth an army of new Cybermen created from the dead. I really love this completely cyber-zombie idea reinforcing that the Cybermen are basically corpses housed in robot suits. The suits aren’t life support, because there really isn’t a person there anymore.

Oh yeah, and the Nethersphere turns out to be a central computer of sorts that is housing the consciousness of all of the recently departed. Of course, Danny finds himself there, and at the very last few seconds is faced with a choice to *DELETE* his emotions away. So is he undergoing cyber-conversion or does he have to be deleted first and is just resting somewhere? A big part of me is internally chanting for him to hit *DELETE*. But, what of the generational offspring of his and Clara’s that she met in a future timeline? Is that timeline screwed because she saw too much of her own future? Or is this the paradox now that Danny is dead, and that timeline can’t take place?

Then there’s Missy’s real identity. Which is THE MASTER. Gender swapping is not uncommon among Timelords and Timeladies, so it really shouldn’t be that much of a surprise. Plus Michelle Gomez is delightfully twisted and has a dash of Eartha Kitt thrown into the Mary Poppins looking package to really make me want to see where she goes and what she can do. Lord knows the Master has had a really random past as far as regenerations. First there was the original Master played by Roger Delgado. Sadly he passed away and we had the “fish face” Master who has used up his regenerations played by Peter Pratt and Geoffrey Beavers Then the body swapped Master played by Anthony Ainley, where the Master took over someone’s body for his own (which I’ve never understood how he was still a Timelord in a body that wasn’t a Timelord’s body). In the DOCTOR WHO movie things took a turn for the weird as the Master was first a worm/snake thing and then a possessed Eric Roberts. In modern WHO he returned from the Time War lost at the end of time with no memory played by Sir Derek Jacoby who then regenerated into John Simm. The Master was then gunned down and “died” but was brought back wrong with weird energy powers and was last seen hurling back into the time locked time war with Rassilon (Timothy Dalton) never to be seen again.

So how did he get back? How did he become a she? How did she hook up with the Cybermen and why? Hopefully all is answered next week!