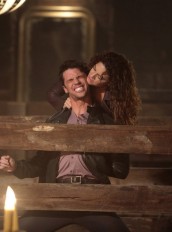 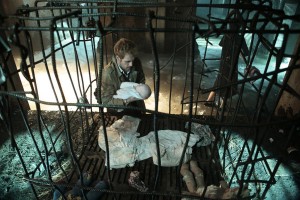 If NBC does not renew CONSTANTINE for a second season it will really be a shame because as “The Saint of Last Resorts” proved, there is a lot that this show has to offer and a show that could be taken in a variety of entertaining ways.

The Fall Finale is the first two-parter of the season leaving viewers dangling at the edge as to what will happen when the show returns after the New Year. The episode was split right down the middle in terms of focusing on John Constantine’s (Matt Ryan) “monster of the week” and Zed’s (Angelica Celaya) storyline dealing with a mysterious past we know little to nothing about.

The Constantine storyline was pretty brutal (in a good way) and follows what we have seen on the show in the last few episodes in that the show is willing to take chances and present a show that is unlike anything else going on TV, save maybe SUPERNATURAL. Something is stealing babies from a nun hospital and killing the mothers of the babies as well. Constantine receives a message from Anne Marie (Claire van der Boom) – a member of the Newcastle crew that is non-to-happy to have to deal with Constantine after what went down involving the child he doomed to hell – that a creature of some sort is terrorizing a hospital and stealing babies.

When he arrives, Constantine realizes that it ties to the coming of the rising darkness (the mythology part of the show that has been brewing since the beginning of the season). Specifically, it is a demon female that is kidnapping babies for an ancient long-forgotten race known as the Brujeria. The reason for this is that the demon along with the Brujeria are trying to bring hell and Earth together so that the demons can run rampant and destroy humanity. Somehow it involves babies being the focal point of the power they need to do this.

In order to get back the babies, Constantine tells Anne Marie that they must do anything to protect the innocent, even if that means a sacrifice from one of them. This comes back to bite him in arse when Anne Marie shoots Constantine in order to escape the bowels of the hospital where the creature had kept the babies and a Brujeria just happen to be roaming – to the wild unsuspecting horror of Constantine. She tells him that she is sacrificing him in order to protect the babies and we are left with a cliffhanger until the next episode.

Again, some brutal stuff and as the episodes go along here, the demons involved seem to be getting stronger, more gnarly and that much more dangerous. Good stuff indeed and why this show needs to be picked up because it is really starting to find its footing.

As far as what’s going with Zed, it is hard to know so far because we are so in the dark about where she comes from and her past in general – although she did give us some information about being locked in a room for a period of time by some evil dude. A group of them come to abduct her to return to “her father” for what reason we don’t know but they are pretty determined. While Zed puts up a good fight, she can’t overcome them all and is drugged to be presumably brought to whoever the father is. Again, we’ll have to see how this shakes out when the show returns.

As said in the beginning of this review, it would be a shame if NBC decides not to roll the dice with the show one more time. CONSTANTINE has a lot going for it. Strong characters, really good and imaginative demons, some decent mythology that has yet to taken hold but is getting a firm grip on the show and a deep history of stories that they could tell thanks to the comics. Hopefully, they’ll do it right by continuing to support the show.