Home » bones review the high and the low season 9 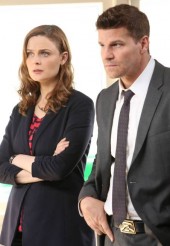 Essentially a PSA in favor of medical marijuana 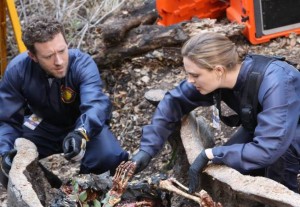 When BONES tackles an issue, it tends to wear its heart on its sleeve, but in the case of “The High in the Low,” it turns into an extended public service announcement on behalf of legalizing medical marijuana. Its arguments are all perfectly sound and we certainly have sympathy for recurring guest character Wendell Bray (Michael Grant Terry), but between his personal situation and the circumstances of the case, it’s a bit like sitting through a telethon with a plot.

When a corpse is found inside a log (by an escaping prison inmate who’d rather go back to jail than deal with the human remains), this turns out to be the corpse of a young woman, Abby Briggs (Katy Stoll), who worked at a medical pot dispensary and suffered herself from lupus. Abby was an art student who had to give up drawing because of her painful disease; when she found that marijuana gave her enough physical relief to do artwork again, she became an advocate for the drug’s medicinal use.

Wendell, bald from chemotherapy, is Brennan’s (Emily Deschanel) lab assistant on the case. It turns out that Wendell is also smoking marijuana – which he had never used when healthy – to help him deal with the side effects of his chemo treatment. Brennan and Hodgins (TJ Thyne) are both entirely supportive. FBI agent Booth (David Boreanaz) is judgmental, because any use of marijuana is against federal law. However, when Wendell in the spirit of openness tells lab boss Cam (Tamara Taylor) about his marijuana use, Cam is forced to fire him – if a defense attorney were to learn that Wendell was under the influence while handling evidence, it could compromise a case. Hodgins and Angela (Michaela Conlin) are both furious at Cam, who feels she had no choice.

Booth, who along with the others has told Wendell to do whatever he has to in order to fight the cancer, finally sees the legal light when he realizes that the law has caused Wendell to lose his job. Prosecutor Caroline, off-screen in this episode, provides Brennan and Camwith a workaround that allows Wendell to continue his medicinal marijuana use and work for the Jeffersonian as a private consultant provided that he doesn’t touch any evidence.

As for the case, it turns out that the victim was growing her own strain of marijuana that had increased pain-relieving qualities and decreased psychotropic effects. She was killed by a pot-dealing college student who was angry she had him thrown out of the clinic and wouldn’t sell to him (and then found out that the marijuana she was growing didn’t produce a high anyway).

A third plotline deals with Booth’s annual certification and his initial resistance to Brennan’s suggestion that he try doing some games intended to boost his brain power. Booth eventually takes Brennan’s advice and does even better on the test than he’s done in past years (he’s been in the ninetieth percentile, now he’s up to the ninety-seventh).

As for this last one, if this is meant to give Brennan a win in the who-gets-to-prove-what-to-whom sweepstakes, it smacks of a consolation prize. There’s nothing at stake here except a little bit of Booth’s ego, which is healthy enough to withstand any test results that wouldn’t impede his job and provide Brennan a blip of satisfaction. It serves neither plot nor comedic purpose and primarily feels like filler.

The larger issue of Booth finally realizing that he is being rigid when it comes to marijuana use is perfectly valid – Brennan even points out to her husband that they’ve had premarital sex in Virginia, where this is illegal (who knew?) and that he had no problem breaking that law. The episode also points out the hypocrisy of telling people suffering with debilitating, life-threatening diseases to do everything in their power to survive and then punish them for doing so.

This reviewer agrees with the episode’s premise, but the argument is laid on so thickly that the story barely has room to breathe. Terry, who indeed rocks the bald look, is forced to play the most patient person on Earth. The actor convincingly suggests levels of anger under an unfailingly polite demeanor, but it might have been better if the writing had let the character express some of it more openly.

As for the case, there are some especially funny/squirmy moments as a couple of Hodgins’ bugs try to haul away a small bit of remains (it looks more amusing than it sounds). Since the investigation is tied thematically to what’s going on with Wendell, we seldom get away from the discussion, and it gets downright didactic at times.

“The High in the Low” fights for a worthy cause, but the same points could have been made with a slightly lighter hand.