Home » Bones review The Ghost in the Killer 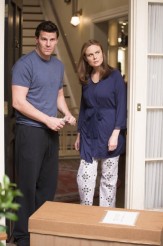 The start of a new arc for Brennan, with some intriguing elements

Although the arcs on BONES are mostly about character, sometimes it helps to have mystery arcs as well. “The Ghost in the Killer” revisits the notion that the late Pelant (Andrew Leeds) really did have information about a female serial killer. Brennan (Emily Deschanel) is still having nightmares on Pelant – nice touch that her nocturnal terrors involve evidence becoming impossibly compromised and contaminated – and Booth (David Boreanaz) is worried about her.

It doesn’t help either of them when a box of human remains is delivered to the front door of their home with a note begging (presumably Brennan) to find the corpse’s killer. The remains turn out to belong to Lana Brewster, a wealthy young woman who became a celebrity due to her sailing exploits and who died in what was ruled a drowning accident ten years earlier. It turns out that Hodgins (TJ Thyne), who grew up rich, knew Lana’s boyfriend, who used to be a jerk and is now just haunted.

Brennan becomes convinced that Lana is the victim of a serial killer. At first, everyone thinks Brennan is simply so traumatized by what happened with Pelant (who tormented her, killed her friends, made Hodgins go broke, etc.) that she’s projecting, but when Hodgins old acquaintance dies in what turns out to be a staged suicide, Booth gives his wife’s theories credence.

Booth actually gives Brennan some good advice this time around, telling her to pursue evidence her way and not let her reactions to Pelant influence her methodology. It still seems like he could give her more benefit of the doubt earlier on, as Brennan is still a very skilled investigator. Furthermore, while it’s understandable that Brennan jumps into investigating what happened to Lana, it seems a little odd that more effort isn’t made to find out who dropped the body off in the first place (still unknown at episode’s end).

On the upside, “The Ghost in the Killer” allows Thyne a chance to shine as he first confronts his old schoolmate, then is horrified when he believes the confrontation may have prompted the other man to kill himself. Eugene Byrd is also very sympathetic as Dr. Clark Edison, who comes in to help Brennan while avoiding an unhappy situation at home.

The episode also introduces some interesting questions – who left the box? Why? Who is the serial killer? If the answers are good, the rest of the season has the potential to be suspenseful as well as fun.