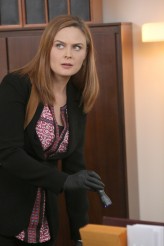 TV Review: BONES – Season 10 – “The Money Maker on the Merry-Go-Round”

An okay mystery with a lot of B stories 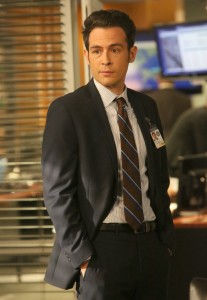 The title of the BONES episode “The Money Maker on the Merry-Go-Round” turns out to refer to a murdered hedge fund manager whose head is found under a piece of playground equipment. One’s first thought may be of something else entirely and, indeed, two different subplots relate to a synonym for a donkey that also is used to refer to human anatomy. Since the title doesn’t appear on screen, this may be lost on a large portion of the audience, but what the heck.

“Money Maker” is in fact a bit of a what the heck episode, with a lot more interest in its B stories than in making the murder mystery intriguing. The deceased turns out to have had an addiction to cocaine and prostitutes, even though he swore to his wife – genuinely ignorant of her husband’s predilections – that he loved her and was just working late. The culprit is one of the victim’s colleagues, who was incensed that the already rich man was acting against the firm’s best interests.

As Booth (David Boreanaz) continues to break in new partner Aubrey (John Boyd), the younger agent seems overzealous in this case. Booth has taken a look at the file and knows that Aubrey’s father was a Wall Street type who embezzled and then fled the country before he could go to jail, leaving his wife and the then-thirteen-year-old Aubrey. Aubrey realizes he’s projecting and removes himself from the case; later, Brennan (Emily Deschanel) talks to Aubrey about her own feelings of abandonment by her parents, who left her when she was a teenager.

At the lab, Brennan finds that intern Oliver Wells (Brian Klugman) is being obnoxiously competitive, though once she has (again) proved herself the superior forensic investigator, she applauds his striving to improve himself.

In the Brennan/Booth household, four-year-old daughter Christine’s use of the word “jackass” upsets Booth, while Brennan feels it’s fine – but once Booth relaxes about it, Christine uses the word on Brennan, who is taken aback.

This last bit is amusing, although it actually makes us want to see the ensuing discussion between grown-ups and child about when it is and is not okay to use certain words (this happens off-camera).

The laboratory competition between Brennan and Oliver works primarily because Klugman invests his character with such cheery arrogance, as the writing of it gets repetitive quickly. (Even with his ego, it’s hard to believe that Oliver supposes for an instant the Brennan’s longtime colleagues will side with him, or even credit his efforts.)

It’s nice that Aubrey has a back story, but – because it’s competing for airtime with all the other story elements – it feels a bit rushed, though it’s nice to see him and Brennan ease into a comfortable work relationship with one another.

“The Money Maker on the Merry-Go-Round” is pleasant enough, but it’s not one of BONES’ more distinctive episodes.