Bone review the conspiracy in the corpse season 10 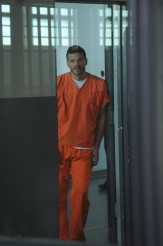 A genuine shocker, on several fronts 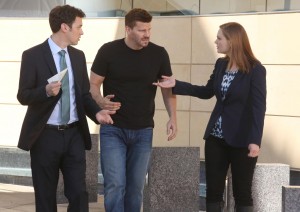 BONES is a lot of things. Usually, the series is fun. Sometimes it’s romantic, sometimes it’s funny, sometimes it’s educational and sometimes it’s head-bangingly frustrating. However, BONES, now embarking on its tenth season – congratulations, team! – with “The Conspiracy in the Corpse,” is usually not startling. This episode has some moments that will catch unspoiled viewers off-guard.

“Conspiracy” starts three months after the events at the end of Season 9, with Seeley Booth (David Boreanaz) in jail, awaiting trial for the murder of three fellow FBI agents. Booth, Brennan (Emily Deschanel), all their friends and the audience know that the “agents” were really assassins trying to kill Booth and Brennan to prevent them from uncovering a conspiracy. Since Booth and Brennan were able to turn the tables on their attackers, the high-placed conspirators did the next best thing and got Booth locked up.

Between aggrieved inmates who have ties to people Booth arrested and guards who think Booth is a cop killer, he’s having a rough time inside, though he insists to Brennan that he can take care of himself. Brennan is afraid Booth will be killed in prison and therefore matter-of-factly blackmails the prosecutor handling Booth’s case. This results in Booth getting released.

Booth is appalled that Brennan put herself in danger to get him freed, and he’s uncharacteristically unprofessional, impatient and reckless in trying to find who is behind the conspiracy.

Back at the lab, the team – with Dr. Clark Edison (Eugene Byrd) assisting – is examining the exhumed corpse of a man who has been dead for sixteen years. The official cause of death was leukemia, which the deceased suffered from, but it becomes clear that the cancer didn’t kill him. The remains were tampered with pre-burial, but eventually, it’s deduced that the victim was deliberately poisoned (by an injection of antacid, fatal when mixed with the anti-leukemia medication).

This relates to the current crisis because the dead man was involved in a conspiracy to cover up illegal activities by a giant chemical corporation headed up by Mr. Sanderson, played by Sam Anderson. (ANGEL fans may get a kick out of seeing Boreanaz and Anderson lock horns again after their respective characters’ adversarial relationship on the previous series.)

Booth’s erstwhile FBI boss Deputy Director Stark (Sterling Macer, Jr.) isn’t exactly thrilled to have the special agent back, but apparently with charges dropped, Booth is entitled to his badge and gun. Booth says that when he’s done clearing up the conspiracy, he’ll gladly give both back. Stark puts an extra agent, the admiring James Aubrey (John Boyd), to keep an eye on Booth, but gives Sweets (John Francis Daley) the responsibility of keeping Booth on the straight and narrow.

On the personal front, Booth visits Sweets at home and finds that sometimes lab worker Daisy Wicks (Carla Gallo) in there, very pregnant with Sweets’ baby.

Sweets winds up holding some critical evidence for Booth; when they’ve arranged to meet, Booth and Brennan hear gunshots and find Sweets on the floor of a parking garage, dying.

Booth is devastated. Everyone is stunned when Sweets’ body is brought into the lab for autopsy. Daisy insists she wants to participate and Brennan tells everyone, “This is not Sweets. These are remains that will help us find Sweets’ killer.”

From anyone else, this would sound cold, but by now we’re conversant enough with Brennan to understand that this is the most thoughtful and respectful response she has to offer. It’s strong, character-driven writing. As for Booth, we have seen him be angry and impulsive before, but “Conspiracy” ups the intensity.

Hodgins gets a few nice moments when his colleagues, as he points out, finally come to him with their conspiracy questions, acknowledging for once that he may be right.

It’s a little shocking how sad the loss of Sweets proves to be, considering the levels of frustration his character has provoked over the years with his unprofessional behavior (his ethical and legal breaches were the equivalent of Booth walking around with a sidearm taped to his forehead, yet the script treated them as normal). However, as Sweets’ character was allowed to grow, becoming more perceptive and sensible and less personally sensitive, he gained traction. He also had good chemistry with Booth, reflected in the performances of Daley and Boreanaz in their scenes together. We’ll miss the guy.

The loss, of course, is liable to propel Booth even further out on the limb to catch the conspirators and Sweets’ murderer. It’s alarming for the character, but it makes for good television.