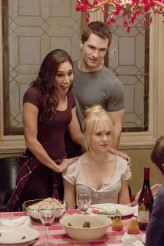 Sally changes the past, with intriguing if predictably disastrous results 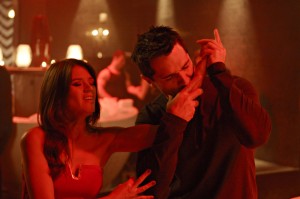 You’d think with vampires, werewolves and ghosts already essential features of BEING HUMAN, adding BUTTERFLY EFFECT time travel (actually name-checked here by the characters) might be a bit much, but “Rewind, Rewind” makes it work in a way that is holds our attention. What’s interesting is not how things eventually go wrong, but how, for awhile, they go right.

When we last saw ghost Sally (Meaghan Rath), her use of magic had trapped her back in the past – on the day she was murdered by her creep of a boyfriend Danny (Gianpaolo Venuta), no less. Having had plenty of time to contemplate the situation, ghost Sally can’t bear to watch her living self be abused, much less killed, by Danny. Ghost Sally therefore body-jumps into her living self, changes the past by punching Danny when he attempts to throw her down the stairs, and runs off into the night.

Sally’s friend Bridget (Angela Galuppo) insists on taking Sally to the hospital, where Sally at first tries to avoid nurse Nora (Kristen Hager) and nurse/vampire Aidan (Sam Witwer), as in this timeline, they don’t know her. However, Sally knows that Aidan is about to lose control with his date Rebecca (Sarah Allen) and drain her, which will lead both to Rebecca being vamped and Aidan’s maker Bishop regaining control. Sally disrupts the date and then proves to Aidan that she knows whereof she speaks.

Werewolf Josh (Sam Huntington) and Aidan still want to rent the house, which Sally now owns. Josh has some hesitations, but Aidan thinks Sally is a guardian angel – she’s saved him from draining a human, she’s saved him from Bishop, she knows what bad things are coming and can avoid them. Aidan and Sally become lovers. Sally urges Josh to date Nora, telling him that they wind up married – but of course, she leaves out the part where Josh causes Nora to become a werewolf.

Because Sally is corporeal, she winds up being the one Josh scratches in the basement. Sally, however, is so happy to be alive that she doesn’t mind being a werewolf, even though Josh is overwhelmed with guilt. Nora wants nothing to do with Josh (she doesn’t know the big secret, so she just thinks he’s strange). Josh is afraid he’ll endanger Nora and winds up befriending fellow werewolf Ray (Andreas Apergis), even though Sally says he’s the guy who turned Josh.

Because Sally is human and not a ghost, she warns Bridget, who is now Danny’s girlfriend. Bridget puts Sally’s words down to jealousy. Because human Sally can’t haunt Danny into insanity (as she did in the old timeline), Danny kills Bridget and gets away with it.

Josh is so upset with Sally trying to course-correct his life that he moves out. When Aidan doesn’t seem to care, Sally is distraught – the Aidan she knew, she says, would never let this happen. Much as she loves Aidan, she thinks they’re not meant to be lovers, just roommates. This depresses Aidan so much he winds up in a blood den.

Ray talks Josh into beating up on some vampires. They wind up at the same blood club where Aidan is. Sally is hanging around outside, worried about Aidan. Aidan comes out with fellow vamp Marcus (Vincent Leclerc), Ray insists on attacking them, Sally tries to pull Ray off of Aidan and in the fracas, Ray hits Sally in the head. Sally dies in Aidan’s arms.

Since nobody in the episode notes it – well, really, Sally is the only one in a position to realize it – it’s unclear if we’re meant to notice that, yet again, a huge downward spiral is created by Josh feeling sorry for himself, even though he’s got a couple of other werewolves around to show that it’s possible to have a relatively satisfying existence. Especially given the fact that, by his own reckoning, Josh has ruined Sally’s life, a little less self-pity and a little more concern for her well-being seems in order. Then again, first/second-season Josh was a huge mope, so it’s in character.

It’s also odd that Sally never mentions the other upside of being a werewolf: Aidan won’t be tempted to drink her during sex. We do see why Aidan doesn’t warn Sally off of trying to help Josh, since Aidan feels so good basking in Sally’s love, advice and approval.

Rath is quite poignant in letting us see Sally’s realization of her true feelings for Aidan, and it’s always fun when Witwer gets to play Aidan in a light phase. In order to get things rolling quickly, we don’t have quite as much Aidan and Josh bonding as we ought to regret Josh’s leaving the house, but there’s a good bit when Aidan appeals to Josh’s love of architectural detail to seal the deal on the house rental.

There are so many possible ramifications to changing the timeline – what happens to Bishop? What are the Dutch doing? What about those purebred werewolves? Will Donna continue to eat ghosts? – that there’s no touching on all of them in a single episode, but “Rewind, Rewind” reminds us of our hopes for the characters while keeping our curiosity alive.