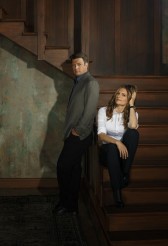 The series creator and the show runner talk the new season 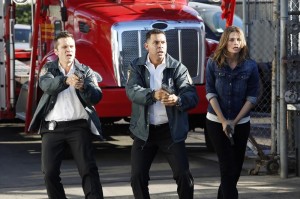 When last we saw Nathan Fillion’s best-selling novelist Richard Castle in the Season 6 finale of ABC’s CASTLE, he was forced off the road and into a fiery crash while on the way to his own wedding. Much of the audience was almost as aghast as Castle’s bride-to-be, NYPD homicide detective Kate Beckett, played by Stana Katic.

CASTLE begins its seventh season Monday, September 29 at 10 PM. Series creator Andrew W. Marlowe and his fellow executive producer, show runner David Amann, are at a party thrown by ABC for its show runners and the Television Critics Association, where they answer some questions about what’s happened and what’s coming.

Since this interview was conducted, it has been announced that Marlowe will be working on the screenplay for Marvel’s NICK FURY feature film, which may explain why he’s ceding some CASTLE duties to Amann. ABC and Marvel are both part of Disney, so Marlowe is still broadly working for the same employer.

ASSIGNMENT X: Are you both show runners now, or who’s doing what?

DAVID AMANN: Well, I’m doing a little bit more of the day to day, but Andrew’s still very much involved. We’ve been working, doing this together as a job for some time, and I’m going to get a little more on my plate so he can have a little less, but he’s still very much working on the show and the vision behind the show, and it’s going to move forward in the same fashion.

ANDREW W. MARLOWE: What he said.

AX: Castle’s situation seemed very dire at the end of Season 6, but it seems likely that since there’s a new season and the show is called CASTLE, that Nathan Fillion’s character is still on it.

MARLOWE: Well, yes. [joking] Ghosts can consult with the NYPD.

AX: Seriously, can you tease anything about what may be coming up?

AMANN: Well, I think that we’re going to be picking up in the premiere exactly where we left off at the end of the finale and the first two episodes are going to be dealing with the aftermath of what’s happened to Castle and grappling with that drama and once we get past those first couple of episodes, we’re going to be back at some version and pattern of what the show normally would be.

AX: Now that you’ve wrapped up the mystery and the meting out of justice regarding the death of Beckett’s mother, since that’s been part of the series from the beginning, does that leave a hole in the series mythology? Are you finding that the show doesn’t need that kind of long-term mystery any more, or are you filling that mythology place with something new?

AX: The long-term mythology has some very serious aspects. If the new mythology revolves around Castle, as opposed to Beckett, does that necessitate Castle becoming a little more serious as a person, or does he deal with that in the way that he deals with most of the things in his life?

AMANN: I think in the first couple of episodes, certainly in the second episode, he’s going to be pretty heavily involved. I think that the questions surrounding Castle are going to be something that’s engaging for him, and I think, moving forward, it will be a little bit [of the mythology] per episode, depending on how we’re dealing with it. For example, in the Beckett mythology, there were heavy mythology episodes, and then there were just run of the mill standard CASTLE fun episodes. And so we touched on those heavy episodes once in awhile, and so I would imagine that we would probably do the same thing with this kind of mythology.

AX: How much is Castle’s daughter Alexis, played by Molly C. Quinn, going to be involved this year?

AMANN: She’s going to continue to be very much a presence on this show. We’re in the midst of working on some pretty interesting stuff for her. We can’t really talk about it yet, but she will definitely be there and continue to grow as a character and continue to be part of the CASTLE family.

AX: What about Castle’s mother Martha, played by Susan Sullivan?

MARLOWE: Very much the same. Given some of the mythology elements that we’re hoping to open up, I think it’s going to raise a lot of questions and everybody in Castle’s immediate circle will have a vested interest in trying to understand what those issues are.

AMANN: We haven’t ruled it out. Right now, we’re concentrating on the first handful of episodes. Given the way last season ended, we’ve got a lot of stuff to service that we’re really excited about. We’re looking to open up some new mythology elements moving forward. But it’s on the table. We haven’t had any deep discussions about it, though, because we’re only in our first handful.

AX: CASTLE has a lot of jokes aimed at its more pop-culture-savvy viewers. Might there be any Shakespearean jokes this season as a nod to Nathan Fillion’s work in MUCH ADO ABOUT NOTHING, or any GAME OF THRONES jokes, just because?

MARLOWE: Well, you know, we’re always fond of our pop culture references. All of our characters live in the same universe we live in. Our assumption is they watch those shows. They have fun in those worlds and our show I think will continue to reflect that.

AX: When if ever are you going to reveal who’s writing the Richard Castle books? The ones that appear in bookstores and are available for sale online in our universe.

AX: Do either of you have a favorite episode/scene/sequence that we’ve seen so far?

MARLOWE: Of the hundred and twenty-some-odd that we’ve done? [sighs] Auggh.

AMANN: I have to pass that to you. There are a lot of shows and a lot of seasons I’m really proud of, because I think we have a tremendous number of really strong shows, but sitting here, I’m not sure if I can cite a favorite.

MARLOWE: I can’t narrow it down to one. I have lots of favorites.

MARLOWE: I’m very fond of “The Lives of Others,” I’m very fond of “The Blue Butterfly.” I think that the science fiction convention episode, because of who Nathan is, is really great, and there are some really wonderful moments. I think some of the stuff revolving around Beckett’s mother’s mythology is very strong. The scene between Beckett and Captain Montgomery [Ruben Santiago-Hudson] in the hangar at the end of Season 3 was I think extraordinarily powerful. Some of the two-parters we’ve done have been terrific, [including] the scenes with Dana Delany. For me, a very special moment is Castle meeting his father for the first time when we had James Brolin on. So there are lots of them. In a lot of ways, it’s like asking us to pick our favorite kid. They all have their charms for different reasons.

AX: Do you have a sense of how long CASTLE can run or how long you’d like it to run?

AMANN: I think the show has a number of years left in it, if the TV gods smile upon us. I think there is plenty of story left to be told with these characters. I think some of the things we’re doing to open up the mythology on Castle’s side help us with that, and I think that there are some aspects of our secondary characters that we’d really like to explore that could take us into seasons to come.

AMANN: Just that we know there was some disappointment among some folks about the season finale and how it ended and that it interrupted an expected event. And there’s good reason for what was done, and I think that when people pick up the show at the beginning of this season, they’ll see what it was and they’ll see there are some great opportunities that were presented by that and that we’re excited about.