The actor also talks FROM DUSK TILL DAWN 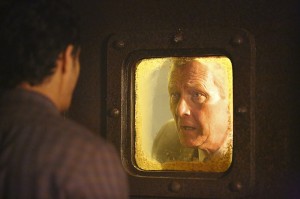 On CBS’ popular new drama SCORPION, Mondays at 9 PM, a team of geniuses headed up by Walter O’Brien (Elyes Gabel) work as outside contractors for the FBI. There is a real Walter O’Brien, who IQ tests rate as one of the five most intelligent people alive, and he and his company really do consult with the FBI.

In the series, Walter’s FBI handler and liaison is Cabe Gallo, played by Robert Patrick. Although he had a number of film roles before, Patrick first broke big as the lethal T-1000 in TERMINATOR 2: JUDGMENT DAY. Since then, he’s been in all sorts of projects on the big screen and small. The actor, born in Georgia and raised in Ohio, has previously played an FBI agent, John Doggett, as a series regular on THE X-FILES. He’s also been a regular – as a military man – in the series THE UNIT and LAST RESORT, and as a minister who has lost his faith in the first season of El Rey’s FROM DUSK TILL DAWN. At present, Patrick can be seen in a small but memorable role as a friendly drug dealer in the new theatrical release KILL THE MESSENGER.

Patrick is at CBS’ Television Critics Association session for SCORPION, where he says of his character, “I’m a Federal agent that hears about Walter, discovers Walter, and basically just brings him back to America [from Ireland] as a young boy. And the relationship is very paternal, a father/son sort of [relationship] … I’ve seen what he can do, and I believe in him. And I want to try to create some room and give him the space he needs to do what he does and be creative. I’ve kind of jokingly referred to it as Colonel Tom Parker with Elvis Presley. He’s such an amazing talent – how do I allow him to exist and be sort of a buffer between him and the government?

“We want him in the government, we want him to work for us. And when I find him again after some years where we haven’t been working together, I find he’s got this incredible team of geniuses that are all quirky and eccentric, and I have to tolerate each and every one of them. And I start to realize what their value will be to this team. And if he believes in them, then I’m going to believe in them.

“So I’m a curmudgeon, in the sense that I’m probably someone that barely knows as much technology as these guys do. And I’m definitely not the smartest guy in the room when I’m with them, and yet I am the smartest guy in the room [in terms of human emotion and the workings of government]. I think you’ll relate to my plight of dealing with them. And when the character’s frustrated, I think the audience might be as well. And I genuinely think that the audience will see that there’s a real strong bond between me and Walter.”

When the Q&A session is over, Patrick makes time for some further interrogation about his new role.

ASSIGNMENT X: Why did you decide you wanted to do SCORPION?

ROBERT PATRICK: Because it reminded me of some of the shows I’ve done in the past that were fairly iconic, like X-FILES FBI guy, UNIT military guy, it sort of brought all that together. I think it’s an interesting and very “now” show, the situations we’re going to be involved with, and being around super-smart people and that whole fraternal relationship that I was speaking about, the sort of father and son thing and protecting [Walter] and not letting him be misused by the government. I found it to be very fascinating. I think it’s a very current show. The script was amazing when I read it. And I think the pilot – as impressive as all the action sequences are, I think that the emotional aspects of the show were the thing that were the strongest to me when I watched it.

AX: Are you intimidated at all by the real Walter O’Brien, who’s an executive producer on SCORPION?

PATRICK: No. I don’t find Walter intimidating at all, funny enough. Because for the same reason he looks at me as a subspecies, I look at him as a subspecies. That’s sort of a joke.

AX: Do you literally mean “a subspecies” as below, or as its own separate section?

PATRICK: It’s sort of a joke. Walter’s IQ is very impressive, but I meet everybody man to man and I’m not overly intimidated by too many people. Does that make sense?

AX: You don’t seem to be easily intimidated.

PATRICK: I’m a pretty confident guy and he may be smarter than me, but there are things that I can do that he can’t do, so I’m not going to surrender any power in that situation.

AX: Do you feel like you bring a lot of yourself to your characters?

AX: So you wouldn’t want to play a meek person?

PATRICK: Well, I’ve played meek people. I’m bringing out that part of my personality that’s a little bit more forceful now, but I would say if it’s the right script and I thought it was going to be the right situation, I’d do it. It would probably be great casting. I’d be open to read anything. I object to some things, but that’s my artistic point of view, whatever I want to do or not do.

AX: How did you enjoy doing FROM DUSK TILL DAWN?

PATRICK: I loved it. I love Robert Rodriguez [who created the series, directed several episodes and runs the El Rey Network where it airs], I loved the whole experience. I think it’s exciting what he’s doing over there at the El Rey Network. The character was fantastic and such a juicy character, one of my favorite characters I’ve ever played. I mean, your wife dies, you’re a priest, you’re with your kids, you’re trying to bond with your kids, you end up getting involved with some bank robbers who kidnap you and they take your Winnebago and the next thing you know, you’re at the gates of Hell. It’s every priest’s nightmare.

AX: Are we going to your SCORPION character Cade Gallo feels any kind of guilt about having misled Walter way back when, or is he completely over that?

AX: And do you enjoy the sort of Swiss watch caper aspect of the episodes, where all of the plot details are very intricate, one depending on the next?

PATRICK: Oh, yeah. I think it’s going to be really interesting to see how these things are put together, these different solutions to the problems that we come across and seeing if they work and it’s going to be fascinating to allow them to work.

AX: Is there anything else you’d like to say about SCORPION that didn’t come up on the panel?

PATRICK: I think that the show has got a lot of heart and, as impressive as the action sequences are, it’s the emotional aspects of the story I think that are really going to be the hook for the audience.