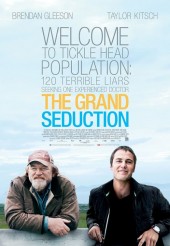 This remake looks like something has been lost in translation

SEDUCING DOCTOR LEWIS, aka LE GRANDE SEDUCTION, was a 2003 French-language Canadian film. The English-language remake, set in Newfoundland, has a Dr. Lewis, played Taylor Kitsch. The doctor is busted for carrying cocaine on a small connecting flight. Rather than risk a prison sentence, the doc agrees – at the behest of the Customs agent – to spend a month caring for the inhabitants of Tickle Head Harbor, a tiny island village that has gone years without a physician. What Dr. Lewis doesn’t know is that Tickle Head is desperate to get a factory contract to bring some kind of local industry back to the island so that the locals can stay where they are without being on welfare. Since one of the conditions for the corporation to even consider putting its factory on the island is that a permanent doctor be on site, Dr. Lewis is actually needed for five years. To persuade him to stay, lifetime Tickle Head resident and new mayor Murray French (Brendan Gleeson) gleans as much information as he can about Dr. Lewis and then gets the islanders to act as though they just happen to enjoy everything the doctor enjoys, like jazz music and the game of cricket.

Conceptually, this is a funny premise, but in practice in THE GRAND SEDUCTION, it seldom works as intended. It isn’t that things are offensively unfunny, they just don’t often take on life. Comedy relies on getting the details right, but here many are askew. Gleeson is a terrific actor and gives a committed performance, but it seems very strange that, as a Tickle Head lifer, he has an accent shared by none of his neighbors. From this starting point, things don’t fit together – for people who surely must have daily routines, we never feel that the locals are being inconvenienced by playing their parts to seduce Lewis into staying. Indeed, the islanders, Murray aside, are a curiously passive lot, easily playing along with Murray but not seeming to have any plans of their own before he comes up with the notion of luring the doctor to turn native.

As for Lewis, Kitsch is game, but his character doesn’t get anything that seems like an actual life. For such a successful doctor, he seems oddly unmissed at his home practice and there’s nothing making him particularly frantic to return to his usual existence. This is meant to signify that some part of him is open to change, but instead it seems like the movie has failed to fill in the blanks. Furthermore, Lewis is meant to be American, so where did his passion for cricket come from? It’s not that everyone in theU.S.is incapable of appreciating this sport, but since it’s not common here, a bit of explanation of Lewis’ enthusiasm would seem appropriate.

The doctor’s character is more a collection of traits than a whole person – there’s no cohesion between his love of medicine, jazz and cricket, so there’s not much zest in the locals feigning coincidental fondness for Lewis’ favorite things.

Further, director Don McKellar has decided on a near-deadpan tone. On the one hand, this has the effect of mercifully not poking us in the ribs, but it also keeps the energy level tamped down throughout.

In its favor, THE GRAND SEDUCTION is stunningly physically beautiful.Tickle Head Harbor looks like a place most people would actually like to visit, perhaps when something more exciting is happening there.