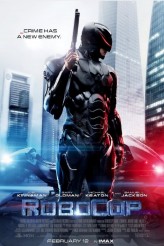 A decent remake made especially compelling by star Joel Kinnaman 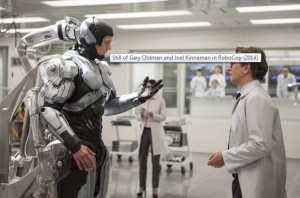 The original 1987 ROBOCOP, directed by Paul Verhoeven and scripted by Edward Neumeier & Michael Miner, gave rise to two sequels, videogames and a batch of TV series both live-action and animated. Given Hollywood’s propensity for remaking movies, it was nearly inevitable that a full-on reboot would come forth. Surprisingly, it’s pretty decent.

A lot of the strength of the new ROBOCOP comes from leading man Joel Kinnaman, probably best known to U.S. audiences as police detective Stephen Holder on THE KILLING. Here Kinnaman plays another police detective, Alex Murphy, who’s on the job on the mean streets of Detroit in 2028. Alex is also a devoted family man, with loving wife Clara (Abbie Cornish) and young son David (John Paul Ruttan) always waiting for him at home.

Alex is unaware that the top execs at OmniCorp, which has its giant robots and human-sized robot soldiers on duty around the rest of the world – even though they sometimes blast children – are determined to get the U.S. to allow robots on American streets. CEO Raymond Sellars (Michael Keaton) and his top aides come up with the idea of putting a human mind in a robot casing. When Alex is badly injured in the line of duty and won’t survive without the heavy mechanical interface, he seems an ideal candidate.

Those who remember the original ROBOCOP may recall that one of the primary plot points was that the scientists wiped Murphy’s mind, so that he theoretically didn’t remember anything about his human life. Here, the initial intent is to have Murphy retain his humanity, until his handlers deem this to be a problem.

The structure of the new movie doesn’t quite make the most of what it’s trying to do – plot points about what Murphy can and cannot do are introduced too late to have as much impact as they should and there are so many bad guys that we aren’t all that invested in what happens to them.

On the flip side, Kinnaman makes us care about what happens to Alex/Robocop, and Samuel L. Jackson is funny if a bit on the nose as a Fox News-esque commentator who is solidly on the side of big business, ready and willing to sell whatever spin Sellars and Co. want the public to hear.

The imagery of Murphy without his armor, when he sees what’s left of his human form, is genuinely disturbing – these shots say more than the dialogue surrounding them. This aside, while the action is lively, plentiful and moderately gory (in a PG-13 way), it’s not awe-inspiring; it fills the bill without delivering the impact that the original had in its day.

ROBOCOP is a decent action science-fiction film that does make us think and feel, but not as much as it could have given its parameters and heritage