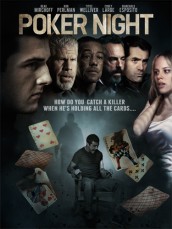 A strong cast in a good idea that partially adds up

POKER NIGHT straddles several genres, two of which are so seldom paired that this aspect is a pleasure – the cop film and the anthology film. Not that POKER NIGHT is a straight anthology; in fact, here the framing device is the main story, with a number of vignettes spicing it up and making good use of the supporting cast. Another surprising aspect is that the framing story is yet another genre, a psycho killer kidnapping tale. This more or less works as well.

The central conceit here is that our main character and primary narrator, newly-minted police detective Stan Jeter (Beau Mirchoff) is the victim of a sadistic kidnapper (Michael Eklund), who has also grabbed and imprisoned an underage young woman, Amy (Halston Sage). As Stan tries to free himself and Amy, he thinks back to the work stories he heard from fellow detectives when he was first allowed to attend their elite poker night.

Here is where POKER NIGHT rises and falls. Do we want to watch Ron Perlman, Giancarlo Esposito, Ron Eldard and Titus Welliver (as well as lesser-known Corey Lange) play veteran cops who hang out, rib each other, narrate and sometimes appear in tales of their characters’ exploits? Absolutely, and bless writer/director Greg Francis for setting up a venue for just that.

On the other hand, there are supposed to be details in these yarns that assist Jeter in his current predicament, and it seems like pretty much everything our protagonist does are logical moves that he might make whether or not he’d ever attended the poker night. There is an element of bluffing, but that’s more on the part of the villain than of our student of human nature.

There are some inventive horror elements here, including the way in which Jeter is stuck in his cell. There’s also a good sense of humor, such as the way we’re shown the kidnapper when he’s narrating his own story. The payoff to his behavior isn’t immediately obvious, and it makes sense as far as it goes.

Mirchoff acquits himself well as a young man who’s already racked up a few secrets of his own and the supporting cast is a dream squad of heavy hitters.

POKER NIGHT has a lot to recommend it, but the game-night stories never seem to feed into Jeter’s plight in a meaningful way; indeed, he fails to learn from one mistake so crucial that it seems like he should take heed of it, if nothing else. The film is so insistent on an internal mechanism that it doesn’t possess that it winds up making us expect more than we get, which is too bad, because we otherwise get quite a lot that is good.