Deliver Us From Evil review 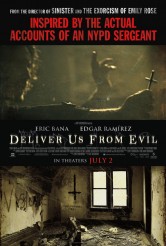 Movie Review: DELIVER US FROM EVIL

Strongly influenced by THE EXORCIST, with good scares but little novelty

It’s not news at this late date that THE EXORCIST has cast a long shadow over many horror films that have followed it since its 1973 release, but it’s not often that we see its influence appear quite so literally as it does in DELIVER US FROM EVIL.

DELIVER US FROM EVIL is based on a book by Ralph Sarchie and Lisa Collier Cool. As the main character’s name is Ralph Sarchie – Eric Bana plays him – it seems that we are intended to believe this is based on fact, even though those who sit through the end credits will see the usual disclaimer about everything and everyone being fictitious.

In any event, Ralph is a detective sergeant with the NYPD. His wife Jen (Olivia Munn) isn’t happy that work always seems to come before family, while little daughter Christina (Lulu Wilson) wants Daddy’s attention. Ralph and his partner (Joel McHale) are first called upon to investigate a domestic dispute where the batterer flees. Then they get summoned to the zoo, where a woman has tried to throw her toddler into the lion enclosure. The child is mostly unharmed (the lions were locked up at the time) and with Social Services, but the woman is still roaming the grounds. And then there’s the strange fellow in the hoodie who is painting over graffiti … also in the lion enclosure.

To Ralph’s surprise, there’s a connection between the spousal abuse incident and the disturbed woman at the zoo. However, when Father Mendoza (Edgar Ramirez), an intense young priest, wants to minister to the woman and matter-of-factly says demonic possession is the source of her problems, Ralph doesn’t believe it.

We have a pretty good idea of where this is likely to go, and the film pretty much fulfills our expectations. Director Scott Derrickson, whose previous credits include the effectively scary SINISTER and THE EXORCISM OF EMILY ROSE. The latter shares EVIL’s screenwriting team of Derrickson & Paul Harris Boardman, as well as its “based on real events” teaser followed by the “entirely fictitious” disclaimer.

Derrickson knows how to set up good scares of both the jump and slow-building varieties, but he relies a lot here on things we remember from THE EXORCIST, from possession makeup to use of strings in the soundtrack to evoke a particular emotion at a specific moment. It works, but the similarities prompt recollections of the earlier film that are sometimes too close for comfort.

The notion of coming at demonic possession from the point of view of a skeptical police officer, albeit a lapsed Catholic one, is intriguing, though once Father Mendoza enters the story, we lose a lot of the twists that the setup seems primed to provide. There are also some logic glitches, such as why one of the possessed people is covering up writing that we’re told has evil power (wouldn’t he want it to stay on view as long as possible?). Who gets hurt and how and when seems a bit random. It’s also understandable that the filmmakers want to give their hero a back story to explain why he’s so especially troubled, but Ralph has one that makes it a stretch to credit that he’s still in law enforcement at the time of the story.

Additionally, there is a detail that is both inaccurate and totally unnecessary. One character, shown to be a righteous person, announces that he is in Narcotics Anonymous (a real-life organization closely related to Alcoholics Anonymous), but still drinks without consequence. Narcotics Anonymous views alcohol as a drug and would not view anyone who partakes as being “clean and sober.” (It would be akin to the character announcing he’s completely sober, though he still shoots meth occasionally.) It’s hard to figure out what the filmmakers were going for by having their former meth addict drink alcohol, since it doesn’t affect the plot in any way; what they accomplish is upsetting and offending any audience members who are in twelve-step programs (this reviewer’s screening companion could talk of little else after the film).

Bana has a nice quizzical quality, along with an underlying ferocity, that suits his character very well, though he wrestles with the accent in a few places. Ramirez has absolute conviction as Father Mendoza. Sean Harris delivers a performance of impressive physicality as one of the possession victims.

DELIVER US FROM EVIL is an okay way to get a few shivers to combat the summer heat. It’s derivative and doesn’t totally hang together, but it gets the job done.