Home » Dawn of the Planet of the Apes movie review 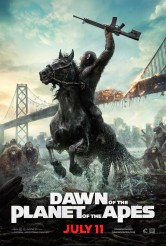 Movie Review: DAWN OF THE PLANET OF THE APES

Awesome remake (though perhaps not of the film you were expecting)

By certain standards, THE BLAIR WITCH PROJECT is one of the most profitable films ever made. No, it didn’t have the worldwide box office grosses of, say, TITANIC, but it cost only a few thousand to make and market and it raked in around $60 million on first release.

BATTLE was arguably the least of the bunch, under-funded and with some rocky scripting. However, the plot went like this. Caesar, a talking chimpanzee raised by humans, had led a revolt of his inarticulate simian fellows in the previous film. About a decade later, when BATTLE takes place, Caesar is the leader of an ape civilization that faces an outside threat from humans and treason from within.

Broadly, this is also the premise of DAWN OF THE PLANET OF THE APES. We met Caesar (Andy Serkis, giving a performance of spine-tingling brilliance) in 2011’s RISE OF THE PLANET OF THE APES. After a privileged upbringing in a human household, Caesar fell into brutal hands and wound up rallying fellow chimpanzees, plus gorillas and orangutans, against their human oppressors.

In the original film series, a plague brought back from space wiped out dogs and cats on Earth. In the new timeline, we see at the end of RISE that a plague borne from laboratory experiments on apes doesn’t affect simians, but it has a catastrophic effect on the human population.

We’re told at the beginning of DAWN that the virus has left only one out of every five hundred humans alive. Small wonder that Caesar’s ape community, living in the hills above San Francisco, believes that humans have died out.

In fact, a number of humans, under the earnest leadership of Dreyfus (Gary Oldman), are living in the now-walled ruins of San Francisco. However, the electricity is about to run out and Dreyfus fears this will plunge his people back into chaos. Malcolm (Jason Clarke) offers to lead a small group to the old dam to see if it can be used to restore power to the city; he’s unaware that there’s an ape civilization anywhere, much less that the dam is right in its midst.

Malcolm’s intentions are peaceful and Caesar simply wants humans to leave him and his people alone. However, between apes who want revenge for the past and humans who can’t accept the idea of another dominant species on the planet, violent clashes are inevitable.

From its inception in the novel by Boulle and even more explicitly in the original PLANET OF THE APES, this series has always had allegorical components. They’re perfectly clear here, but director Matt Reeves and screenwriters Mark Bomback and Rick Jaffa & Amanda Silver do a good job of balancing spectacle and emotion with observations about the seeds of war. Frankly, any message is going to go down a whole lot better when it’s delivered by a visual of an army of apes, some charging on horseback and others swinging along power lines.

It should be noted that the special effects wizards on this movie have overcome a problem plaguing motion capture performances: human and humanoid eyes have in many films looked dead. Here, the apes’ eyes sparkle with life and feeling. Serkis as before gives an absolutely masterful performance; we love his Caesar. Toby Kebbell as the increasingly angry chimpanzee Koba does thoroughly impressive work and contributes some iconic moments, while Karin Konoval is highly appealing as the orangutan Maurice.

The humans aren’t as distinctive, though Clarke exudes decency as Malcolm and Kodi Smit-McPhee has some good moments as Malcolm’s comics enthusiast son.

One more aspect of note: DAWN OF THE PLANET OF THE APES may be the most action-oriented, least conventional issue-oriented theatrical release to be conducted largely in sign language (the primary method of ape communication, though they speak a little English), which is pretty cool.