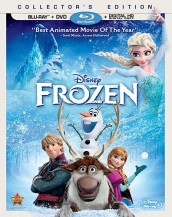 FROZEN Highlights this week in Blu-ray, DVD and VOD Releases 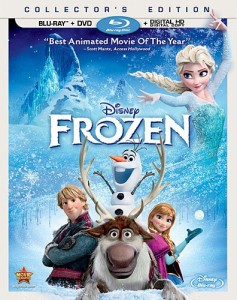 FROZEN – What can be said about Disney’s FROZEN that hasn’t already? It is a great animated flick that appeals to all ages with catchy songs, two strong female leads and loveable side characters that really adds up to a tremendous effort. I know of many kids that are aged anywhere between 3 and 13 that have fallen in love with the movie and want everything from FROZEN parties for their birthday and other celebrations than already drumming up for Halloween being either Anna (voiced by Kristen Bell) or Elsa (by the wickedly talented Adele Dazeem, kidding, Idina Menzel). Not that Disney hasn’t had other big hits on their hands such as BRAVE, TANGLED or WRECK-IT RALPH, but nothing has captured the global imagination since THE LION KING (which has obviously been said before). The plot is fairly simple: Two sisters that take over a kingdom after their ruling parents die have been secluded in the castle for one reason – Elsa has ice powers. When Anna gets out of the castle at a later age she immediately galls for the first dude she lays eyes on and this sets Elsa off unleashing her power and sending the region into a forever winter.

Anna meets up with a not-so-friendly ice merchant in Christof (Jonathan Groff) and his pet reindeer to find Elsa after she scuttles off into the forest to live in seclusion. There they meet a snowman that was created by Elsa once she went all winter on everyone and try to thaw out Elsa. This is best seen on Blu-ray because even animated it still looks so much better in high definition. Sure, you can still get the impact of the movie on DVD but you get that much more in HD.  Also you get a great big bag of special features including sing alongs – the songs are already stuck in your head so why not – deleted scenes, commentaries and more. Worth it if you have children. 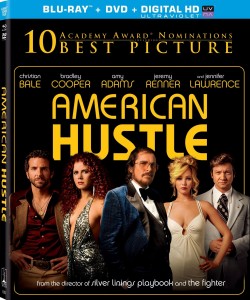 AMERICAN HUSTLE – Sometimes I think Hollywood just loves to push a highly popular, big name actor movies down our throats regardless of how bad the movie might be. AMERICAN HUSTLE got raves as a change of pace from the normal Hollywood movie crap because it was a period piece set in the 70s, had loads of talent (Christian Bale, Bradley Cooper, Amy Adams, Jennifer Lawrence, Jeremy Renner) and featured a talented director known for cool arty movies in David O. Russell. AMERICAN HUSTLE is bad. Real bad. It not only bores you to tears but is so damn long that you can’t wait for the end to come but it never, ever does. It just drones on about these bad people, doing bad things but they aren’t really that bad but get caught up in a no win situation. This is a mess of a movie. It is as if they thought ‘Hey, let’s do a 70s movie with lots of cool costumes and hairspray and just have high paid actors meander about with an overly complicated plot that makes little to no sense at times.’ What makes it worse is the high praise that HUSTLE has been given. Instead of pointing out how stale, directionless and self-indulgent it is, more time is spent praising how well the actors look in 70s regalia and how fresh the movie is because you don’t see these types of movies anymore. Lipstick on a pig and all that. Now the film looks great and yes the costume department deserves props but beyond that there is nothing really enjoyable at all about this movie. It is one bad stereotype of all the bad things that Hollywood rolled into one picture and given accolades based on just who is in the film and who directed it. 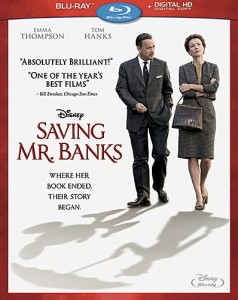 SAVING MR. BANKS – On the other hand, we have a very interesting look at how the creative team at Disney films brought Mary Poppins to life on the big screen in 1960s. This is also a period piece but instead of a self-serving, pointless crapfest SAVING MR. BANKS is the story of the life of author P.L. Travers (Emma Thompson) and how she grew up in Australia in the early 1900s. But it is also about a grown up Travers that travels to Los Angeles against her better judgment to discuss the possibility of turning her book into a movie. Walt Disney (Tom Hanks) wants to bring the book to film because he promised his daughters 20 years ago that he would do it. But the two differ in the approach to the film and it takes serious negotiations that are sometimes incredibly funny in order to get past the staunch Travers and Disney’s own ideas that clash with hers. Overall, this is a fun movie that really shows that Mary Poppins the movie wasn’t just put together easily like other Disney creations but took a lot of work on everyone’s part. 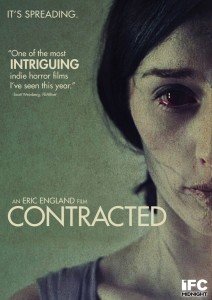 CONTRACTED – If there was ever a case to be made to not indulge in one-night stands CONTRACTED totally hammers that point home. Samantha (Najarra Townsend) is a lesbian dealing with a partner that is just not that into her. So one night at a party she gets a little too wasted and ends up having dirty sex in a car with some dude she meets at the party. Soon after, Samantha begins to have issues. And by issues I mean mass bleeding from the vagina, dark circles under her eyes, a nasty skin rash, loss of teeth and a gnarly bloodshot eye. Not an ordinary VD. It only gets worse from there. She starts losing her hair, the rash expands, she starts puking blood and her eyes and fingers turn red. While most of the cool, original horror flicks seem to be coming from overseas these days, there is one outlet that is doing it right as well in IFC. They continue to take chances in bringing these twisted, not your ordinary type of horror flicks to production and that is definitely a good thing. CONTRACTED is a fun film about the disintegration of a young woman in the worst possible ways. 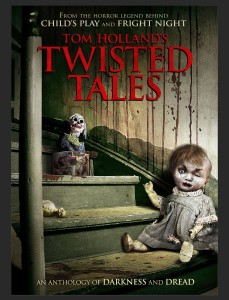 TOM HOLLAND’S TWISTED TALES – Horror anthology films usually are either very good or very bad. This actually falls into the so-so category. Tom Holland, famous for CHILD’S PLAY and FRIGHT NIGHT, introduces seven horror tales that originally aired on Fearnet. There are some hits and misses here and generally a lack of any scares but they are short bits that you can easily digest over the course of a few days if needed so that’s a plus. This collects the first season and while Holland isn’t the best at introducing the short horror films, he isn’t an over-the-top Crypt Keeper either so that’s at least a positive (unless you like the Crypt Keeper). The best of the bunch are “Boom” – which is a clever cat and mouse tale between two ex-bomb disposal army guys – and “To Hell With You” – that features a demon that offers up revenge for a price. Sadly, there aren’t enough of these good episodes to clash with some of the really bad, cheaply made and horribly acted ones that cancel it out. In fact, the acting is nearly beyond tolerable at times. So if you enjoy anthologies this will be one to check out but don’t expect a NIGHT GALLERY or THE TWILIGHT ZONE here. 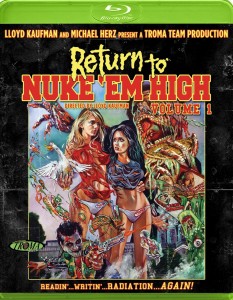 RETURN TO NUKE ‘EM HIGH: VOLUME 1 – When you open a movie with a couple having sex only to have an irradiated penis creature come and hump them both, spraying them with weird blood color ejaculate, melting the dude’s penis and completely melting the woman, you know this won’t be your typical fare. You gotta hand it to Troma, after all these years they are still delivering the same type of films they have for the past few decades. But that doesn’t mean they can’t change with the times. Take RETURN TO NUKE ‘EM HIGH: VOLUME 1. The whole premises takes away the nuclear power plant leaking into the school’s water supply and replaces it with an organic food company setting up shop where the power plant used to be located. Get it, it’s putting the green in going green (literally). The puns come fast and obvious. The nudity is gloriously gratuitous. There is a host of political and social commentary laughs that hit the nail on the head. The plot is razor thin. But RETURN TO NUKE ‘EM HIGH is a lot of fun and something that has been missing from our B movie fare for quite a while. 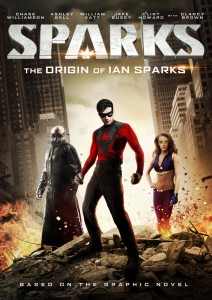 SPARKS – SPARKS is like a poor man’s, more serious KICK-ASS. It revolves around a meteor that struck Earth about the turn of the century and those that survived got super powers. Those super powered individuals passed their powers to their children thus creating a number of individuals with powers. Sparks wasn’t one of them but yearns to be a superhero so he teams up with another super hero chick and they fight crime. But Sparks has issues with blacking out. Eventually Sparks finds some actual super powered people but they are not exactly what he was hoping for. Meanwhile, there is a masked super villain that is going about killing people randomly and when Sparks hooks up with these super types he hopes to end that reign of terror. However, he doesn’t get that and plunges deeper into darkness until he can learn the truth behind his blackouts, his parents death and the serial killer. Not a bad superhero flick that is made on the cheap but the second half of the flick makes up for the slow start and ends up being decent. If you liked KICK-ASS then you might like this one but don’t expect any laughs, this is all serious.