The actress talks about her work on the HBO thriller series 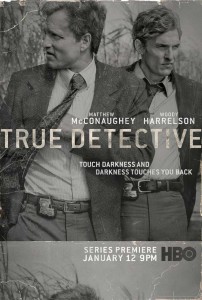 In TRUE DETECTIVE, HBO Sundays at 9 PM, Woody Harrelson and Matthew McConaughey play two very different Louisiana police detectives who worked a seemingly occult serial killer case back in 1995 that seems to be resonating in the present. The closed-ended eight-episode series, created by Nick Pizzolatto, moves back and forth across decades and continually surprises the audience.

At a Q&A session held by HBO for the Television Critics Association, Monaghan says of how she became acquainted with Maggie, “I think I read three different episodes, and they were over the course of the series. So I had a very good idea of where the character went and what her arc was. And that’s precisely what I loved about this series, is this format and being able to develop and reveal a character over an extended period of time. That really appealed to me, and she is a very interesting character. Her arc is really exciting. And she develops a relationship with both of the men, but I think both of the men ultimately make the mistake of underestimating her as the series progresses.”

As far as playing opposite her costars, Monaghan says, “Well, it’s interesting because we [Monaghan and Harrelson] have a history together. We worked on a film called NORTH COUNTRY years ago [in 2005]. And our scenes are pretty volatile, I would say. Our Hart home becomes an increasingly intense place to be. But [Harrelson has] this boyish charm that I think [is] really effortless; Martin has that as well. But as volatile and intense as the scenes would become, we had a really good time working together. And Matthew is just equally talented as Woody.”

Harrelson, who’s also on the panel along with McConaughey, pretends offense. “Equal?”

Monaghan laughs. “I better watch myself.” She then addresses her two fellow actors. “Your commitment to character is just incredible. And I’ll say as well you were really, really in the zone and flowing, so to speak. So it was a real pleasure to be opposite that.”

Following the panel, Monaghan is available for a brief private conversation about TRUE DETECTIVE.

MICHELLE MONAGHAN: All of the above. First of all, the writing got me right off the bat, of course, and ultimately, it was the cast of characters, everybody that was sitting up there – Nick [Pizzolatto] and [director] Cary [Fukunaga] and Woody and Matthew. But ultimately, it was the writing. And also, creatively, I had never had the opportunity to do something that was sort of a period piece, to actually have the opportunity to physically or emotionally develop a character over a period of time. So that actually appealed to me as well.

AX: Are you bringing any of your memories of 1995 into your portrayal of Maggie?

MONAGHAN: Oh, my God. It’s so funny, because everybody said it’s a period piece, but it didn’t feel [dated] – it felt dated, is what it did, in terms of the wardrobe [laughs]. There were a lot of floral dresses and this and that.

AX: Is there anything else you’d like people to know about TRUE DETECTIVE?

MONAGHAN: I think it’s a riveting adult drama, and I think that’s what’s so exciting about it. I think people are really going to be struck with the beauty of it. It’s actually visually stunning to watch, as well as emotionally compelling.