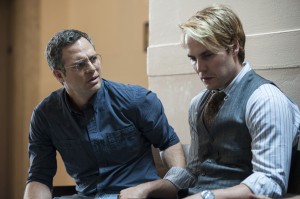 Larry Kramer’s play THE NORMAL HEART was first produced off-Broadway in 1985. In real life, Kramer is one of the founders of ACT UP, which describes itself as “a diverse, non-partisan group of individuals united in anger and committed to direct action to end the AIDS crisis,” which was being largely ignored by the government in the Eighties. In NORMAL HEART, the main character Ned Weeks is Kramer’s fictional surrogate, a gay man who is enraged by the indifference he encounters as he tries to get help for his critically ill lover and friends in 1981.

Kramer has now adapted THE NORMAL HEART as a film for HBO that premieres Sunday, May 25. Ryan Murphy directs an all-star cast that includes Taylor Kitsch, Matt Bomer, Julia Roberts and Jim Parsons, with Mark Ruffalo, who also serves as co-executive producer, heading up the team as Ned.

Ruffalo is present at HBO’s Q&A session for THE NORMAL HEART for the Television Critics Association, not long before he heads back to London to reprise his role as Bruce Banner/the Hulk in THE AVENGERS: THE AGE OF ULTRON. He has a few moments free after the panel to discuss both characters.

ASSIGNMENT X: Not to be funny about it, but right now, you’re going back and forth between very angry characters, between Ned Weeks and Bruce Banner. Is this something that you like or that you look for, or is this just the way things have worked out?

MARK RUFFALO: I think that was the way the cards fell this season.

AX: Can you contrast their styles of anger at all?

RUFFALO: [laughs] Larry’s anger [expressed through the character of Ned] is more deeply rooted in a political, social righteousness, and Bruce Banner, although similar, is not able to direct quite as effectively as Larry can.

AX: Have you done THE NORMAL HEART on stage previously?

RUFFALO: I didn’t do it on stage. No, that was Joe Mantello [as Ned in the 2011 Broadway revival], who was in the movie as well.

AX: Would you like to play Ned on stage?

At the panel, Ruffalo talks about meeting and working with Kramer. “I met him years before we shot the movie, in hopes that we were going to shoot the movie, and I had already been aware of him through his work at ACT UP when I was a young actor in the drama department and started seeing kids walking with ACT UP buttons on, and so I probably got an education as a straight young man early on, but I did spend quite a bit of time with him and came to really love him, and I’ve spent hours and hours and hours with him, begging him to tell me stories about what they went through and about this time [when NORMAL HEART is set].”

Kramer has a reputation for being quick-tempered, but Ruffalo says, “I didn’t really experience that with him. He’s very sick now, and he’s older, and he was opening the door to me as an actor to share his life [story] with me, so I wasn’t in political opposition to him, so that was taken out of the conversation, thank God.”

Since Ned the character is based on Kramer his creator, Ruffalo says, “I actually tried to go directly into him as much as I possibly could and honor him and honor his complexity and his journey and his passion and his commitment to this movement, which is what I deem completely heroic.”

What did Ruffalo do as the co-executive producer in terms of getting the film made with exec producer/director Murphy? “Well, Ryan and I sort of set out on a journey together, and when he came to me to do it, he asked me to be his partner on it, and so as he was developing the script, he was running ideas by me and so on and so forth. We worked together in the casting. You know, I was lucky enough to have him bring me along on this journey as a creative partner, but also as a collaborator and as an amazing leader, and I feel like we went a long distance to get to this place today.”