Exclusive Interview: Luke Pasqualino on THE MUSKETEERS and playing D’Artagnan 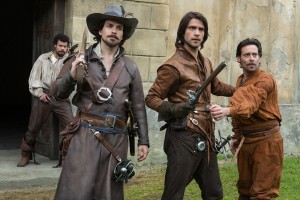 Howard Charles is Porthos, Santiago Cabrera is Aramis and Luke Pasqualino is D'Artagnan in THE MUSKETEERS | ©2014 BBC America/Larry Horricks

Alexandre Dumas’ novel THE THREE MUSKETEERS has been adapted for the big screen a number of times. Now BBC America has THE MUSKETEERS, which premieres Sunday, June 22. The series keeps seventeenth-century warriors Porthos (Howard Charles), Athos (Tom Burke) and Aramis (Santiago Cabrera) together, joined by the eager D’Artagnan, played by Luke Pasqualino, all still fighting for monarch and country. The storyline diverges somewhat from the familiar plot of the book, but our heroes are still up against the nefarious Cardinal Richelieu (Peter Capaldi).

Pasqualino, who hails from Peterborough, England, previously played Paolo in Showtime’s series THE BORGIAS and the young William Adama in BATTLESTAR GALACTICA: BLOOD AND CHROME. After doing a Q&A panel for THE MUSKETEERS, the actor is at a garden tea party that BBC America is hosting for the Television Critics Association, where he obligingly further discusses playing D’Artagnan.

LUKE PASQUALINO: I got sent the script late 2012 by the casting director, who told me about it and I read the first episode of the series and fell in love with it, fell in love with how the character was portrayed and really wanted to pursue things further and I did and got the offer and couldn’t wait to get started, really.

AX: And did you have any particular concept of the Musketeers? Were you thinking, “Oh, if I play a character in the past, I’d like to play Robin Hood”, or …?

PASQUALINO: That’s kind of a tough question to answer, but no, not really. I was just very excited to be a part of this, and as soon as I found out who else was involved with it, it made me want to do even more.

AX: A lot of real-life soldiers say that they join up because they want to learn something and they’re fighting for the person next to them. Is that D’Artagnan, or does he have a larger purpose?

PASQUALINO: Absolutely. It becomes slightly more evident in the series what he’s fighting for. I don’t think it’s giving much away – he definitely really is fighting for what he feels is right, and as the series progresses, D’Artagnan sees he can’t just be as impulsive as he has been previously. He’s got to actually think about his actions slightly more and take it to a different level.

AX: What does D’Artagnan believe he’s fighting for?

AX: So he has a view of himself as sort of like Lancelot, a man of destiny?

PASQUALINO: I don’t think he has any kind of view of himself, really. He’s very impulsive and his view of himself could change from moment to moment, he’s – “insecure” isn’t the right word, but he’s not a self-indulgent guy, so [he feels] too much time could be possibly wasted thinking about himself when there’s far more important matters in the world to be thinking of.

AX: Given that all of you who play the Musketeers trained together before you started shooting, was there difficulty in playing somebody who wasn’t part of the Musketeers at the start?

PASQUALINO: No, not at all. We all bonded equally, like the brothers in arms that we portray on screen. We’re all there for each other, everyone left their ego at the door and it was just amazing.

AX: So there isn’t a lot of time spent with D’Artagnan being the outsider …

PASQUALINO: No, none at all.

AX: The series looks as though it has some changes in plot from Alexandre Dumas’ novel and previous film versions. Does it still have the romance between D’Artagnan and Constance?

PASQUALINO: It does, yes. That’s quite a big storyline for my character on the show.

AX: Was there a sequence that was particularly difficult or challenging to shoot?

PASQUALINO: Early on, in the early episodes of the show, there was a lot of snow on the ground, so working in those conditions and trying to swordfight with snow underfoot proves to be quite difficult at times. It’s one of those things – you just crack on, you just do it and you work it out and it turns out great.

AX: Anything that was particularly emotionally challenging?

PASQUALINO: I have a movie coming out soon called SNOWPIERCER.

AX: Is there anything else you’d like to say about MUSKETEERS right now?

PASQUALINO: All for one and one for all – please watch it.