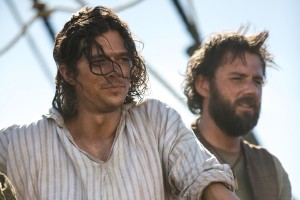 Chief among the Treasure Island crew is veteran pirate Long John Silver. John Silver – not “Long” yet – is played in BLACK SAILS by Australian actor Luke Arnold. Arnold has had roles in the series THE ELEPHANT PRINCESS and WINNERS AND LOSERS, and starred in the feature BROKEN HILL. Later this year, he’ll be seen portraying rocker Michael Hutchence in the miniseries NEVER TEAR US APART: THE UNTOLD STORY OF INXS.

Arnold at Pasadena’s Ritz-Carlton Hotel for a Q&A session for the Television Critics Association with fellow cast members McGowan, Toby Stephens (Captain Flint of The Walrus) and Hannah New (Eleanor Guthrie), along with Levine, Steinberg and their fellow executive producer Brad Fuller. When the session is over,Arnold makes himself available in the lounge, where he talks about playing the wily, infamous Silver.

ASSIGNMENT X: Did you have any opinion of John Silver before you were involved in BLACK SAILS?

LUKE ARNOLD: I’d say the one in my head was Tim Curry in MUPPET TREASURE ISLAND. I’d seen that growing up and that was what stuck in my head. All the John Silvers that have come before this, we had to really get away from these – the really big campfire ideas – and get back to the gritty reality. Obviously, I did actually go and look at the other versions of John Silver that have come out – there have been so many, played by a lot of great actors over the years, just to know that what was out there and what might be in people’s heads – but really, this is a new version and a real origin story for the character in the book.

AX: Did you come up with any kind of back story for Silver? Because from his behavior when we first meet him and he’s stealing and killing, even though he’s not a pirate yet, he’s clearly got a pirate mindset already.

ARNOLD: He’s definitely someone who has survived by his wits his entire life. I have a back story for it and I know the writers do, and we talked about it a little, but really, there’s something quite neutral about Silver when we meet him, and that’s what’s kind of fun. It’s a guy who’s just come out of nowhere who’s going to be this thorn inFlint’s side and no one really has any idea where he came from [laughs]. But definitely he’s someone who has not been tied to anything before, who is very much out for himself, very rarely would want to align himself to anyone. I think the idea of becoming part of a crew and having some loyalty to that is pretty foreign to him. He really works just for himself. In a way, that’s a very pirate-y idea, but at the same time, it’s not. Everyone on this island is invested in this world. They work together for their ship and kind of the greater good of all of them againstEngland, and against the rest of the world. And Silver is not really part of that yet. As long as he can keep himself out of trouble, that’s all he cares about.

AX: Does he have any desire to become part of that? What does John Silver actually want?

ARNOLD: It’s interesting at the beginning, because when we meet Silver, there’s nothing he’s tied to. So he wants a good payday and he wants some money, and he wants to survive, really. More than anything, he just wants to survive. He has no real grand plans more than that when we meet him. What’s kind of the character arc at the beginning is him deciding whether or not he’s going to get invested in this world, whether he’s going to stay in Nassau, whether he’s going to align himself with the crew of The Walrus and Flint.

AX: Given that you’re also playing Michael Hutchence, do you think there is any similarity between being a pirate and being a rock ‘n’ roller?

ARNOLD: Definitely. I think it was a really fun year for me last year. Going from John Silver to Michael Hutchence was just a dream come true. And there are definitely some similarities, but I think in a way they’re not, as well. After, say, being a pirate in this world in this show, it’s very gritty, it’s very physical, and then on the other side, living the high life as a rock star lead singer was very different. So it was quite a different mindset, actually, more than I thought it would be.

AX: As Hutchence, do you get to sing “Kick”?

ARNOLD: Yeah, we do “Kick” in the show as well. I sang a few – it was a mixture of me actually singing in the show, as well as miming along to some of Michael’s stuff, but we put as many hits as we can in the show, so you get to relive a few.

AX: Back to BLACK SAILS, what was the most physically difficult part of the job? Did you have to climb up rigging, or do a swordfight, or fall down? There seem to be a lot of people falling down cliffs and being dunked in water.

ARNOLD: Yeah. Anything in the water tank was terrible. It was freezing – those were the hardest days, I’d say. The thing about Silver, especially in the first season, he doesn’t do that much fighting, because he’s not worried about losing face. He will run from any fight, no problem. So there’s a lot of running, a lot of jumping – there’s a moment of jumping off a ship in one of the first few episodes that ends in a belly flop that was pretty painful to do. So yeah, the belly flop still sticks in my mind, but anything in water was pretty tough.

AX: Were you having a good time? Some of the other actors have said that despite the serious tone of the show, there was a lot of laughter between takes.

ARNOLD: Yeah. We’ve got such a great cast – and not just the cast, the producers, the crew – we’ve just got so many good people on this. Not only is it a great show, the people we get to work with are just fantastic, so there are a lot of laughs. There has to be. I think the first day I walked into set, Lukas Ettlin, one of our [directors of photography], pretty much said, “If you’re not having fun on this show, you can’t have fun anywhere.” It’s a great group and it’s a great show, so it’s just a joy.

AX: Is there anything you would like people to know about BLACK SAILS?

ARNOLD: There’s so much, but really, I just think, no matter what you think you should be expecting, you’ve got to tune in and begin the adventure of this show. And the writers have done such an amazing job – we’re midway through Season 2 now and just recently going back and watching the first episode, you see things that begin that have really long throws as far as story. And it’s so interesting. It’s my favorite show now – the only downside is, I have to go and make it before I get to watch another episode. So I would just say to everyone, no matter what you think you expect from a pirate show, tune in and give it a chance.