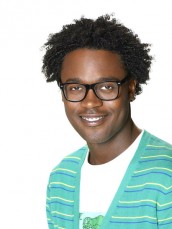 The actor talks his role in the new half-hour comedy 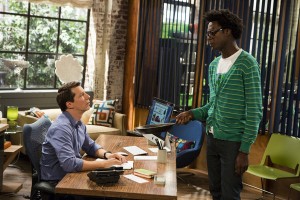 On NBC’s half-hour comedy SEAN SAVES THE WORLD, Thursdays at 9 PM, Sean Hayes plays the title character, trying to be a good single gay father to his teenage daughter (Samantha Isler) while at the same time coping with a tyrannical new owner (Thomas Lennon) at work.

Echo Kellum plays Hunter, one of Sean’s coworkers and friends, who is usually ready to follow Sean’s lead. Originally from Chicago, Kellum did stage comedy and improv with the Groundlings and the Upright Citizens Brigade; he was previously a regular on the Fox half-hour comedy BEN AND KATE.

At an NBC event for the Television Critics Association, Kellum takes time to talk about helping Sean on SEAN.

ASSIGNMENT X: What is Hunter like? Is he just trying to get out of the way of the new boss, would he like to lead an insurrection against the new boss?

ECHO KELLUM: Well, see, I feel like the character would definitely lead an insurrection. He’s very passionate about work and this type of place that they work at is an online retail shop – they have some high-end things sometimes, and some high-end clothing and whatnot, so I feel like Hunter is the type of character who’s just super-passionate about everything, and so the new boss comes in, and he tries to change the way that the business is running and do cutbacks and cut corners in certain places, so Hunter’s very, “I’m not feeling that.” He’s a very honest and open character, too, so he says pretty much what’s on his mind.

AX: What is Hunter’s friendship like with the Sean character?

KELLUM: I think very cool. They’re very tight, they’ve known each other for two or three years at this point in the show where we come in. I feel like Sean is his boss, but he also can come to Sean with any personal stuff going on in his life. Hunter is a musician, and Sean is the type of friend who goes to see his shows and gives honest critiques, but I think they definitely have a good friendship.

AX: How does Hunter feel about Sean suddenly having full custody of his daughter? Does Hunter get involved at all in helping Sean with parenting?

KELLUM: He’s very supportive. In my opinion, he’s an extremely supportive type of friend who you would want to have there in a pinch. So I feel like he’s just definitely helping to push Sean in the right way, where he can hopefully maintain his life of being a newly full-time single dad and having to deal with the arrangement at work now.

AX: And does it help or is it a little confusing that Sean Hayes, the person playing your boss, actually is your boss behind the scenes?

KELLUM: Yeah, I know, right? [laughs] Sean is so the type of person where you would never be able to tell that he is your boss, in the sense that he was very open and real and accessible. He is who he is, no matter what. Whether he’s your boss or whether you’re his boss, he’s just a really genuine, awesome person. So it doesn’t come through in any way when we’re working. But I do feel there are positives to it; we can actually go to our boss and experiencing the same thing we are, being actors on set – or as I like to call it, in the field – he’s right there along with us, so I feel like it’s awesome. It would be like if a general came to the front line with his guys and he was fighting [alongside] them. So I think it’s definitely a benefit to have him there.