The actor also talks about WEEDS and ANIMAL PRACTICE 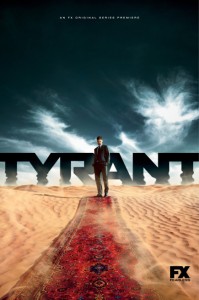 In FX’s new series TYRANT, premiering Tuesday, June 24 at 10 PM, Bassam “Barry” Al-Fayeed (Adam Rayner), a Pasadena doctor, married with children, takes his family for what is supposed to be a short trip to the Middle Eastern country where he was born. However, Barry’s father is now in charge in the nation of Baladi and wants his son to remain there.

Although the show focuses on Barry and his family, the Middle East looms large in U.S. politics. That’s why American diplomat John Tucker, played by Justin Kirk, is in Baladi.

Kirk, a native of Oregon, spent eight years as Andy Botwin on Showtime’s WEEDS, had an arc on MODERN FAMILY and starred in the short-lived NBC comedy ANIMAL PRACTICE. He’s at a party Fox and FX are throwing for the Television Critics Association, where he talks about his new gig.

ASSIGNMENT X: Can you describe your character on TYRANT?

AX: And is this kind of a departure for you? Because normally, at least on television, you do – well, WEEDS wasn’t really …

KIRK: Were you going to say “comedy”?

AX: I was going to say “comedy,” and then I remembered WEEDS and thought, “Well, WEEDS wasn’t really …”

KIRK: Well, WEEDS changed that, I guess. Before WEEDS, I don’t know. I guess so. This is not a comedy. Maybe there will be a laugh or two, but it is different than what I’ve been doing lately, yeah.

AX: Do you watch HOMELAND?

KIRK: I do, I’ve seen every episode.

AX: Does TYRANT seem to you at all to be the flip side of HOMELAND, involving the people that Carrie and Saul have been spying on?

KIRK: That’s interesting – it’s definitely a world in which we’ve never seen a show take place. Jennifer Finnigan [who plays Barry’s wife Molly] and I are the only American actors – oh, and the kids also, but it’s a very multinational cast and we’re shooting in Tel Aviv, and for American television, it feels like something new.

AX: Are you patterning your character on anyone particular, seeing that we have a number of sleazy people who’ve been in government?

KIRK: Chris Christie. I’m patterning my character actually on Bridget Kelly. I can’t get enough of the Chris Christie story – I don’t know if you’ve had time to catch up on all that. I think it all remains to be seen right now, because I’m only sort of introduced in the pilot. But I’ve had much discussion with my bosses and I’m as excited as anyone to see what it becomes.

AX: You’re shooting the series in Tel Aviv, but the pilot was made in Morocco. How was working there? Was it extremely hot?

KIRK: Most of our stuff that we shot was in a big fancy hotel as the presidential palace.

AX: Do you feel more confident about TYRANT starting up than you did, say, about ANIMAL PRACTICE?

KIRK: No. You know, I did eight seasons of a television show [WEEDS], and so I don’t go into anything worried about how long it’s going to last. ANIMAL PRACTICE, I loved every second I was there. It was brief and I try to be here now.

[ANIMAL PRACTICE costar Tyler Labine] is just a really solid actor. He often plays the sort of crazy guy, and in this part, he [was] sort of the sensitive straight guy. But he can pretty much do anything. He’s just sort of a straight-ahead great actor. The whole cast – that’s what excited me – to a person are major committed comic performers. Betsy Sodaro had never been on any TV or film, she does sketch comedy at UCB [Upright Citizens Brigade] and she’s one of the funniest people I’ve ever worked with.

AX: Any thoughts on why WEEDS was so successful and so long-lived?

KIRK: Who knows? Who knows about those things? I think that’s the reason why it went on so long, is that they had the courage to reinvent it every couple of years, because who wants to see the same show in Season 8 that it was in Season 1? It was great.

KIRK: I go when they ask. I’m not a regular cast member, so when they ask me to come do it, I do. It’s been awhile, but those guys are all my friends and I’m sure I will again.

KIRK: Well, I did a couple episodes of WAYWARD PINES, which is a Fox show. It’s pretty cool. I guess that’s it. I just finished those. So yeah, off toIsrael.

AX: Anything else you’d like to say about TYRANT?