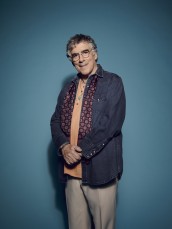 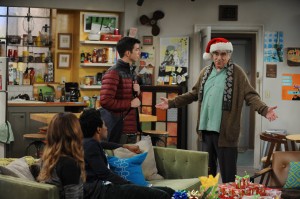 Elliott Gould has had a busy and diverse year. On Showtime’s drama RAY DONOVAN, which concluded its second season and has been renewed for a third, he plays Ezra Goldman, boss of Ray (Liev Schreiber) until the last episode, when Ray wreaked havoc. On Fox’s half-hour comedy MULANEY, Sundays at 7 PM, Gould plays Oscar, the ever-upbeat across-the-hall neighbor of comedian John Mulaney (played by the series creator of the same name).

Gould is a prolific acting veteran, having starred in such influential films as Robert Altman’s MASH and THE LONG GOODBYE and Paul Mazursky’s BOB & CAROL& TED & ALICE; he’s also beloved for his recurring role on FRIENDS.

ELLIOTT GOULD: I started my career in song and dance as a nine-year-old with a group of performing children. And then I went into the chorus of Broadway musicals and then eventually played some principal roles and then discovered a camera and did quite a few films.

ASSIGNMENT X: How did you work out being on both MULANEY and RAY DONOVAN, which began airing their seasons at roughly the same time?

GOULD: I got permission. There was no [scheduling]. [MULANEY’s] Andy Ackerman has been a wonderful director and there has not been a conflict in time and I have cooperation, so I can play a different character in two different pieces.

AX: Oscar in MULANEY is a little more free-spirited, but he’s not entirely unlike your OCEAN’S character Reuben …

GOULD: I’ve heard that. Reuben Tishkoff was also a flamboyant character. He wasn’t gay. And of course, this character is a highly original character for me to do, which is lots of fun for me. 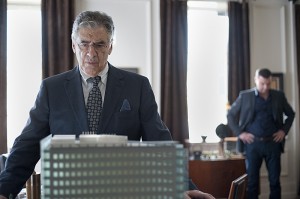 AX: And Ezra in RAY DONOVAN is …

AX: But doesn’t Ezra have an interest in creating spectacle, at least as far as promoting his own business?

GOULD: “Spectacle” is an interesting idea. Well, in terms of the hospital that he is constructing to honor his late wife, and the cancer study – I mean, he’s a totally different character [than Oscar]. I think with Oscar, you see all of Oscar’s insides. Oscar expresses what he’s feeling. With Ezra, you don’t necessarily know, because it’s somewhat of a dark character.

AX: So Oscar has no hidden dimensions?

GOULD: Not that we know of, no, but if the writers have it, we’ll make it alive. I’m really very fond and respectful of John Mulaney.

AX: You’re continuing to work a lot at this stage of your career. What do you attribute that to?

GOULD: My answer to that question is, my mother never gave up. And I have to be the way I am. And as far as my own ignorance, my lack of perspective and judgment through a good deal of my career, it’s taken me forever to attain this character, and therefore, to have this opportunity and to be able to have the nature and the strength and the health to work, and to [get the] work, I’m extremely grateful and humbled by it. I’m going to be seventy-six. I have a family, I have grandchildren and grown children, I have a very good relationship with nature. So to me, it’s all about the family and mostly about chemistry and being honest and true. I need to exercise and be sensible in terms of my time and conditioning.

AX: Do you enjoy acting as much as you did thirty, forty years ago?

GOULD: As a child, I always loved to play, and so to me, acting is playing. Even with Shakespeare, the actors would be called “players,” and I love to play. I do enjoy it, but it’s important that I recognize boundaries and limits which I didn’t know before. One of the ways that I’ve been able to get under the roots of my insecurity has been to recognize and accept my limitations. I never knew any, and now I have to recognize that and always be prepared.

AX: What do you mean by limitations?

GOULD: Well, just to be able to stay focused, to stay within the guidelines of what is expected of any part, any character that I play.

AX: Do you enjoy the half-hour comedy format? And is MULANEY multi-camera or single-camera?

GOULD: This is multi-camera. I’ve done it before. I mean, I enjoy working and it’s a challenge, and for me to keep up with these very young new people is very humbling and I enjoy the opportunity and I work at it. 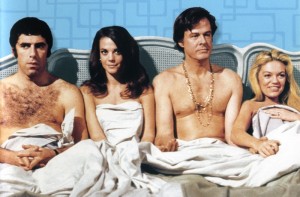 AX: Do you tend to watch your own past performances?

GOULD: I don’t tend to, but I will, because I have to be sensitive to not repeating myself too much. And then it’s interesting, because I know what I’ve done, and sometimes I’ll go back and take a look at it, and then realize, “Oh, I didn’t understand myself then. I understand myself now.” But I don’t have time for that. I’m not interested in ego and vanity, I’m interested in continuing to work and recognizing what we’ve been talking about.

AX: Paul Mazursky passed away in June of this year. Can you speak about that yet?

GOULD: I’ve reflected how deeply [working with him affected] and it still touches me. I’ve spoken with Betsy, his widow, and Jill, his surviving daughter.

AX: Do you have any particular memories of working on BOB & CAROL & TED & ALICE with him?

GOULD: Well, the most significant, more than being nominated for an Academy Award [as Outstanding Supporting Actor] was, I found my first objective relationship in existence in BOB & CAROL & TED & ALICE, and it was with a camera. And I realized that the camera didn’t give me problems, I gave me problems. And that the camera would never manipulate me or lie to me. And so that really saved me. So now I’m right at the threshold of being moved, so Paul was great.

AX: Are any of your children following in your creative footsteps?

GOULD: My children are wonderful, especially my daughter, who has two children of her own. My sons have acted – my first son [Jason Gould], with Barbra [Streisand], is a brilliant, really decent guy. I’m totally devoted to him. He’s a composer and very gifted. Each one has a life of their own, but we all have something in common.

AX: Now, do you define professional success in the way that you did when you were younger?

GOULD: I couldn’t. That would be success in the eyes of others. I always would want to please my mother, please my father, and where their minds were at. And now I find that to be at peace and in harmony with myself, I feel that that’s a great success.

This interview was conducted with a group of three reporters following Fox’s Q&A panel for MULANEY for the Television Critics Association press tour.