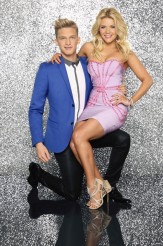 Week 5 and Simpson is eliminated on DWTS

In a stunning coup de grace Disney took self promotion to a whole new level tonight with Disney Night on DANCING WITH THE STARS. The couples danced to famous songs from such classics as MARY POPPINS to FROZEN, now available on DVD convenienty. While the challenges to look Disney-esque might be bigger for some – yes, you Maks, others relished in the opportunity to be charming, crabby, beastly or princessy. And through all the fluff and animation spilling onto the dance floor a new leader emerged – James Maslow & Peta Murgatroyd, who scored the first perfect score of the season. While we saw the youngest competitor Cody Simpson & partner Witney Carson eliminated.

Guest judge Donny Osmond – himself a DWTS champion – oh’ed and awed over the contestants, fitting right in with constructive criticism and great praise for the celebs. Danica McKellar & Val Chmerkovskiy jumped up the leader board with an almost perfect 39 for the night. Charlie White & Sharna Burgess and Amy Purdy & Derek Hough ended the night with 37 while NeNe Leakes & Tony Dovolani and Meryl Davis & Maks Chmerkovskiy ended “D” night with 36. Candace Cameron Bure & Mark Ballas climbed back up after a disappointing last week and earned a respectable 35, but poor Drew Carey & Cheryl Burke landed in last place for the night with a mere 28.

Candace Cameron Bure (actress) and her partner Mark Ballas
She really enjoyed herself. Goodman said she brought joy to the ballroom. Osmond told her to never give up. Inaba said she could do even better. Tonioli wants her to let herself go.
Scores: Inaba – 8, Goodman – 9, Tonioli – 9, Osmond – 9, Harland – 9

NeNe Leakes (reality TV star) and her partner Tony Dovolani
Wow! She’s got a lot of attitude. Goodman said they were a match made in dance heaven. Inaba said she rocked the villain. Osmond said she owned that Foxtrot. Tonioli said it was a dance suited for her.
Scores: Inaba – 9, Goodman – 9, Tonioli – 9, Osmond – 9, Harland – 9

Drew Carey (actor/TV host) and his partner Cheryl Burke
Bouncy! Goodman called it zippa dee do! Osmond told him to use his core. Tonioli said his Quickstep had too much going on. Inaba said he maintained the fun.
Scores: Inaba – 7, Goodman – 7, Tonioli – 7, Osmond – 7, Harland – 7

Amy Purdy (Olympian) and her partner Derek Hough
So graceful. Goodman said she had a wonderful drift in her Waltz. Tonioli said she never looked more beautiful. Osmond said she is a serious contender. Inaba said she hopes Disney makes her the next princess.
Scores: Inaba – 9, Goodman – 9, Tonioli – 9, Osmond – 10, Harland – 9

Danica McKellar (actress) and her partner Valentin Chmerkovskiy
Great job! Goodman said she had flair and care in her Quickstep. Inaba gave her a big hug. Osmond told her she knocked it out of the park. Tonioli said she tamed the beast.
Scores: Inaba – 10, Goodman – 9, Tonioli – 10, Osmond – 10, Harland – 9

Meryl Davis (Olympian) and her partner Maksim Chmerkovskiy
So cute together. Goodman said it was a wamba of a Samba. Inaba said their connection was very special. Osmond said it was thoroughly entertaining. Tonioli said he had jungle fever.
Scores: Inaba – 9, Goodman – 9, Tonioli – 9, Osmond – 9 Harland – 9

Who Went Home: Cody Simpson & Witney Carson
Who Has Legs To Take Home The Mirror Ball: James and Danica just stepped it up!

The X List: The Five Best DOCTOR WHO Doppelgangers
TV Review: BREAKING BAD - Season 5 - “Madrigal”
News Item: SUPERNATURAL con in Los Angeles will feature Jared Padaleck...
Exclusive Interview: Peter Gadiot is the genie of ONCE UPON A TIME IN ...