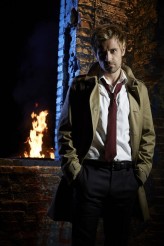 The actor talks playing the series lead, plus his production company with Joseph Morgan 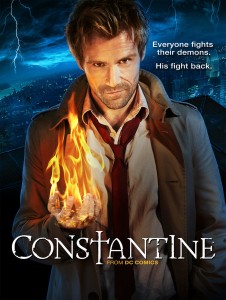 NBC’s new series CONSTANTINE, Fridays at 10 PM, is based on the HELLBLAZER comics and graphic novels by Jamie Delano and Garth Ennis. Matt Ryan plays John Constantine, a man who has literally fought demons but gave up the battle after a mistake on his part led to the death of a child and Constantine’s damnation. Now Constantine is given a chance at redemption by a possibly untrustworthy angel (Harold Perrineau), but he must resume combating the minions of Hell.

Unlike the 2005 big-screen CONSTANTINE that starred Keanu Reeves, the television version, adapted from the source material by David S. Goyer and Daniel Cerone, returns Constantine to his British roots.

Ryan, who is originally from Swansea in Wales, was previously a series regular on CBS’ CRIMINAL MINDS: SUSPECT BEHAVIOR and has a number of British acting credits, as well as two feature films under his belt as lead actor/producer. At a party thrown by NBC for the Television Critics Association, Ryan talks about CONSTANTINE and more.

ASSIGNMENT X: You sound a little different talking now than you do on CONSTANTINE …

MATT RYAN: This is my normal accent, but in the show, I change it slightly to make it more English and Northern. John Constantine is from Liverpool, which is right next to Wales, because Wales is a country of its own, and then Liverpool is right next to it, but to do a full-on kind of Liverpudlian Scouse accent on American network television is probably not the best idea. So what we’ve done is, we’ve kind of toned it down a little bit, made it kind of more general Northern, so that people can understand it.

AX: Were you familiar with the HELLBLAZER comics before you became involved with the series?

RYAN: Well, I was kind of familiar with the comics. My best mate is a John Constantine fan, and it’s his favorite character, so for years and years, I’ve been hearing about John Constantine in my ear. I didn’t really know who it was. I saw the movie, but that was about it. And then when I got the audition for the role, he sat me down and put me to rights and said, “This is how it’s going to be and this is what it’s going to be like,” and told me that after all these years of knowing him, every time I went to his house, I’d sleep in the room where he kept all his comic books, and I didn’t know that I was actually sleeping next to the whole canon of the HELLBLAZER comics.

AX: Did he do a good job of describing John Constantine to you?

RYAN: He did. He’s a hardcore fan. He’s going to be my harshest critic on the show. So I think if I can aim to please him, then I think I’ll be all right. And even now, he’s constantly pressing me for storylines and what we’re doing and everything, and constantly keeps on sending me little snippets here and there, of character traits and things that I can use. So I’ve got my own personal John Constantine specialist.

AX: For you, what is the essence of John Constantine?

RYAN: The thing is, John is a tortured soul. He’s someone who carries a lot of guilt and shame around with him, and he deals with that with his kind of ironic, British cynical wit. The thing is with John is, he’s flawed and he’s raw and he’s rough and he’s an Everyman’s man. He’s a common bloke. I like to describe him as “your working-class antihero.” Because he’s not a superhero – he’s your everyday man’s man.

AX: John is very suspicious of almost everyone, yet he trusts Chas, who’s played by Charles Halford. Why do you think that trust is there?

RYAN: I think that because Chas has been around for a long time, and there’s just something in Chas that John inherently trusts. Chas has that kind of loyalty streak in him, so I think that John trusts Chas because he’s always stuck by his side, he’s someone he can always rely on, and hopefully that relationship will continue and John doesn’t manipulate Chas too much.

RYAN: To be honest with you, not green-screen, no, but I did a videogame called ASSASSIN’S CREED: BLACK FLAG, where I played Edward Kenway, the lead character, and we shot two-and-a-half hours’ [running time] worth of footage. It’s almost like shooting a movie, you know? And that was all motion capture, which was really exciting for me, because I’d never done motion capture before. And that was a little bit like working on green screen. I almost feel like, remember when you were a kid and you used to run around in the woods and you used to pick up a stick and that stick would become a gun and then it would become a sword? You’re using that part of your imagination. Doing green-screen or motion capture and all those kinds of things, for me, it’s challenging, but it’s great, because you really have to go there in your imagination, and as an actor, that’s a great thing. It takes a little bit of time to get into it if you haven’t done it before, but then, after a couple of days of working with it, I fell into the groove and really started to enjoy it.

AX: In the pilot, there’s a scene with the bugs all over the walls …

RYAN: Yeah. They weren’t there [laughs].

AX: Did they tell you, “Imagine this is a wall full of bugs”?

RYAN: Yeah. And then I had to kind of track them with my eyes and imagine they were there, but that’s the fun part about it – you have to use your imagination.

AX: What’s your interaction like with the CONSTANTINE show runners?

RYAN: Oh, man, they’re awesome. I feel so blessed. From the beginning of the whole casting process, they’ve been champions of mine. Their body of work is amazing and we all get on great, which is always a good help, but professionally as well. It’s great. I love those guys to bits.

AX: Have they given you any insights into the character?

RYAN: Yeah. We’ve talked about it a lot and they’re obviously very passionate about it. We’ve gone through everything and they’re always on hand and very supportive of anything I need as we go forward, so it’s great just to feel supported as I take on such an iconic character.

AX: Have they said anything specific, like, “You know, John always wants a cigarette and we can’t show him smoking, so he’s going to be even more frustrated than you think he is”?

RYAN: [laughs] Well, they didn’t quite say that, but they give you little pointers and while we were doing the pilot as well, you’re still discovering things, and there’s this whole process of growing into it. I’m really looking forward to fleshing out the part – we all are – the character and the series and really getting underneath his skin.

AX: Has there been anything that’s grossed you out on the show?

RYAN: Do you know what grossed me out? That bit in the pilot, when the nana [grandmother] turns round and she opens her eyes and then all the black goo comes out, that grossed me out, but I wasn’t there that day, so I didn’t see it [at the time it was shot]. So when I watched the pilot and saw that, that kind of grossed me out.

AX: Is horror something that you like to watch as a viewer?

RYAN: It is, it is. I’ve always liked the genre and I actually produced a movie and acted in a movie with a good friend of mine, Joseph Morgan, called ARMISTICE, which is a kind of genre horror flick, and that was the first movie we made with our production company that we had. So yeah. I made a couple of short films as well, little gothic fairytale-y kind of short films as well, so yeah, I’m really interested in the genre.

AX: Is this Joseph Morgan who plays Klaus in THE ORIGINALS?

RYAN: Yes. We’ve known each other since we were sixteen. He’s English, but he grew up in Wales. He’s my best friend.

AX: Is ARMISTICE out now?

RYAN: It is, yeah. We had limited release in about six cinemas and then it went on demand. So it was a low-budget British film. We’ve made two now. That was our first one, with our company called M&R Films. There’s four of us involved – Ben Read, Luke Massey, myself and Joseph Morgan. And then we’ve got another one, FIVE HUNDRED MILES NORTH, which is just in its final days of post-production, which is completely different genre – it’s a comedy road trip movie.  Me and Joseph Morgan play lead roles opposite each other again.

RYAN: We’re looking to take FIVE HUNDRED MILES NORTH to festivals this year or next year, so look out for that.

RYAN: There’s lots I’d like to say about CONSTANTINE. I could stand here talking for hours.

AX: To rephrase the question, what else are you allowed to say that you’d like to say?