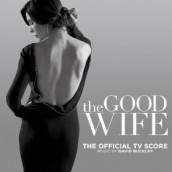 If the religiously-minded Antonio Vivaldi was a television composer writing music for a less-than holy heroine, than his work might sound akin to the wittily dramatic music that David Buckley has been up to with the last several (and continuing) seasons of CBS’s hit THE GOOD WIFE. While Buckley might be busy on suspenseful feature scores like ATM, GONE and PARKER while simultaneously blowing away a couple thousand mercenaries in the videogame arena of CALL OF DUTY: GHOSTS, THE GOOD WIFE  gives his defendants a chance to hear a far warmer, and more emotional side from the composer – one that also couldn’t be further from the cold, rhythmic music that accompanies most courtroom shows.

But even if you haven’t joined the program’s cult following, Buckley’s thoroughly engaging album is well worth having for its spot-on way of replicating a classical style, as crossed with more dramatically suspenseful cues – a listening experience that’s a bit like having one’s gambol through the European countryside interrupted by the orchestra doing a dramatic left turn to a world of heavy-duty strings, electric guitars, pensive pianos and sample grooves. It’s one way of effectively segueing between humor and malice aforethought for a season that upended its heroine’s life with the death of a beloved character. Buckley’s certainly spiffed up his music’s symphonic impact by having it replayed by the Hungarian Studio Orchestra, whose lush performance is classy in the best sense of the word, journeying from the height of costumed elegance to the big, important-sounding strains of the show’s ripped-from-the-headlines appeal. It’s a niftily offbeat and nicely thematic conceit where 17th century harpsichords and hold equal musical enjoyment with the scoring demands of today’s legally working women. And that’s not even counting the album’s bonus track of a hilariously salacious song tribute to THE GOOD WIFE‘s no-good hubby that’s distinctly 21st century in origin.

Click on the link to Purchase THE GOOD WIFE soundtrack