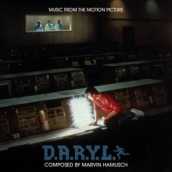 Marvin Hamlisch gives an cyborg boy a heart of gold

At first, it might have seemed an odd choice to have the Oscar-winning composer of THE WAY WE WERE score a movie about a kid cyborg. But when you consider what a beautifully melodic sentimentalist that Marvin Hamlisch was, hiring him for this sweetly unique 1985 kid’s adventure made perfect sense. Young star Barret Oliver seemed to be doing next to every memorable genre movie from the period (FRANKENWEENIE, COCOON and THE NEVERENDING STORY among them), and brought much warmth to this robotic spin on E.T. as a super-smart twelve year-old who finds shelter from government baddies with a nice suburban family. Hamlisch uses all of his naturally programmed orchestral poignancy to give a “boy’s life” feeling to this likeable film, coming up with a memorable theme that creates a heartland warmth with guitar, harmonica and strings – along with outright synthesizers for what’s beneath Daryl’s skin. But perhaps the score’s most effective moments are when the said feel-good music of hearth and home gives way to the outright menace of the military.

Having contributed one of the best, if unsung Bond scores for THE SPY WHO LOVED ME, Hamlisch revels in the big, charging brass and drum timpani that makes for some terrific action music, the score practically whirring like an alarm as the theme takes on soaring heroism during the memorable sequence of Daryl’s escape on a stealth plane. It’s about as close to a Superman score as Hamlisch got, and one can only imagine the comic book possibilities he might have played if the movie took off further than its 80s cult appeal. As is, D.A.R.Y.L. is a musical gem that impresses as much for its emotion as its action, with Hamlisch showing off his touch for a great theme-based song as Teddy Pendergrass performs “Somewhere I Belong.” Thanks to La La Land Records, D.A.R.Y.L. has finally been located to still stand tall as a prime example of Marvin Hamlisch’s remarkable versatility to play both derring do and yearning emotion, as heard through a superkid who just wants a real family.

Click on the link to Purchase the D.A.R.Y.L. soundtrack