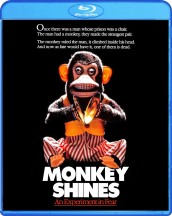 A terribly underrated George A. Romero gem about a killer capuchin monkey 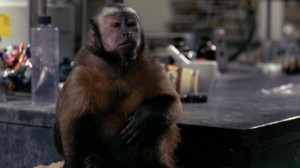 George A. Romero has had a pretty amazing and eclectic career, though most people know him for his undead movies – NIGHT OF THE LIVING DEAD, DAWN OF THE DEAD and DAY OF THE DEAD.

It’s a shame, because throughout his six-decade career, he’s created some wonderfully twisted and underrated movies that don’t have flesh-eating ghouls in them and that few people rave about including 1976’s MARTIN, 1981’s KNIGHTRIDERS and 1988’s MONKEY SHINES.

Shout! Factory just released MONKEY SHINES on Blu-ray with loads of special features and it’s a reminder of what a master craftsman Romero can be. Hopefully the re-release gives it a new life, because it certainly deserves it.

The premise, frankly, sounds horrible. A quadriplegic man Allan (Jason Beghe) struggles with his new wheelchair bound life only to be aided by his scientist friend Geoffrey (John Pankow) who lets him have Ella, one of the capuchin monkey’s he was experimenting on. Ella becomes Allan’s new a companion and helps with things Allan can’t do anymore.

However, the experiments on Ella have made her not only incredibly smart, but somehow has allowed her to form a psychic bond with Allan. When Allan gets angry, the monkey lashes out for him until things go too far when Allan is convinced Ella is murdering for him.

While the set-up takes some time to get up and running, it’s worth the wait as the last hour is a harrowing and taut cat and mouse game that would do Alfred Hitchcock proud. Romero has created a literal fun house of surprises and scares as Allan, bound to his wheelchair, has to stop Ella from harming his friends and new girlfriend Melanie (Kate McNeil) before it’s too late

MONKEY SHINES is one of those movies that unfortunately was mis-managed by Orion Pictures, the film company that acquired it. They didn’t understand the movie they had and created a horrible marketing campaign that didn’t hint at how suspenseful the film ultimately was. Additionally, Romero still had to overcome most people expecting bloodbaths from him due to his DEAD films, so the lack of gore in the film no doubt turned off his die-hard horror fan base too.

I always liked MONKEY SHINES, and re-watching it, I was reminded at what a great little thriller it was. There are some elements that feel dated and some of the acting, particularly in the first half of the film gets a little melodramatic (especially from Allan’s mom played by Joyce Van Patton), but once all the puzzle pieces are in place for the tour-de-force finale, the movie is rock solid.

Kudos also goes to Boo, the capuchin that plays Ella. There’s no CGI trickery here, they had to do everything practical with this film and Boo is the true star of the film. As Ella, you care for her, you hate her and you’re scared of her. It wasn’t easy getting what they needed from her, but when they did, it works flawlessly within the film. Even with the advances in CGI, and even if this movie was done with a fully CGI creation, there wouldn’t be the emotional resonance the real performance of Boo provides.

The special features are also a great find, particularly the making of featurette. Hearing the stories from Romero, his FX artists (who created some animatronic monkey doubles for some scenes) and some of the actors, it’s fascinating this movie actually worked as well as it did. The monkeys were unruly and unpredictable and they had to use various filmmaking tricks to fully realize the scope and depth of the movie. This featurette is a must-see for anyone wanting to know how a movie this complex is made without the aid of computer generated effects.

The deleted scenes section is pretty uneventful, though the alternate ending is actually an interesting find. A jump scare tagged on to the end of the movie (which Romero and the producers hated) was omitted and instead we find that Stephen Root’s scientist character is carrying on with the monkey experiments. The ending is interesting, but actually transforms MONKEY SHINES into more of a horror movie and less of a thriller. In the featurette, Romero says he hates that the original ending was changed, but I would argue, for a change, that the revised studio interfered version is actually a better coda for the film that Romero ultimately made.

Trailers, still galleries and trailers also round out the special features.

With Romero’s other Orion film THE DARK HALF also recently released by Shout!, it’s nice to see two of his studio efforts given the deluxe Blu-ray treatment. If anything, both movies are reminders of the career Romero should have had – doing larger, studio films which continued to build on his abilities to expertly craft suspense and compelling characters.