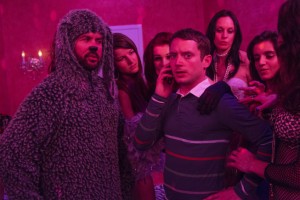 “Suspicion” is one of WILFRED’s frequent forays into subject matter so weird and so not-to-be-found-anywhere-else that the question is less a matter of whether it’s funny or not than where it’s going. As is often the case when the show suits up and jumps out of the plane into the wild topical yonder, we get a bit more structured closure than we do when the writers are being less outrageous.

In “Suspicion,” Ryan (Elijah Wood) wants to be named guardian of his baby nephew Joffrey in the event that something happens to Joffrey’s mom, Ryan’s sister Kristen (Dorian Brown). Kristen, however, is leaning toward giving custody to her and Ryan’s as-yet-unseen father. To prove his worthiness, Ryan offers to babysit while Kristen goes on a date with a seemingly nice young doctor named Michael (Barry Watson).

So where does Wilfred (Jason Gann) come into it? Having married his stuffed animal (literal) sex toy Bear last week, our canine protagonist is already claiming he needs his romantic freedom and that he and Bear have broken up. However, when Joffrey, like most babies, begins playing with the big stuffed Bear, the dog becomes jealous, insisting that Joffrey and Bear are now involved.

Director Randall Einhorn takes care to show us at all times that, really, Joffrey is just a normal baby who has no idea what the dog is saying or thinking. Whether or not the whole subject gets a reaction of “Ick” or “Huh …” depends on the viewer (though the “ick” people probably gave up on this series a while back).

Meantime, Ryan gets himself into a tizzy with the idea that Michael is no good for Kristen, and his efforts to prove this backfire in traditions true to both sitcoms and this series specifically. The moral of the story, as both Ryan and Wilfred realize, is that in their fears of becoming unnecessary, they start inventing reasons to be jealous – though the canine’s are a bit more esoteric than Ryan’s.

Of course, even viewers who like the show may come to the conclusion that Ryan shouldn’t be the guardian of an infant, not because he talks and listens to a dog, or because he gets irrationally freaked out about the idea that Kristen may not need him any more, but because he lets Joffrey play with the incredibly unsanitary Bear.

Brown gets to be a little bit touching as well as funny here, and there’s an intriguing bit with Ryan and Kristen’s father as a voice on the phone (let the guessing of the guest actor begin!) at the end.

Whether it’s funny or diverting or just fascinating in how different it is, WILFRED consistently takes us to places no other shows go, or even know exist. “Suspicion” is an episode that reinforces this.