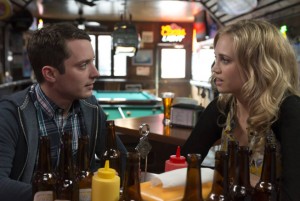 A combination of jealousy over Ryan’s friendship with the mailman (Zachary Knighton) and overheating in the car causes Wilfred to espouse born-again Christianity. Meanwhile, Ryan doesn’t want to talk with Jenna, for whom Ryan still carries a torch, about the disaster of his ended relationship with homicidal Amanda. Instead, Ryan prefers to hang out with the mailman, but discovers that his new pal has his own sorrows (a well-liked colleague was killed by a pit bull). When Wilfred’s attempt to blow up the mailman with fireworks fails, the dog trash-talks the Almighty – the fireworks then blow outside. Ryan realizes that everybody has problems and decides he can talk to Jenna after all.

In the end, our heroes are back where they usually are – bewildered on the basement couch.

“Comfort” is not a serious parody of anybody’s beliefs, but rather the show’s way of ribbing false piety, with Wilfred marrying Bear, complaining about the mailman being a Satanist, etc. It’s lightly amusing, but not nearly as trippy as the show can get.

Ryan doesn’t stand up for himself much with anyone this time out, though he does take the odd step of locking the dog in the car with the window cracked. In reality, this could kill a dog on a warm day – when Wilfred talks about a near-death experience, we can’t tell if he’s supposed to be exaggerating in typical fashion or if we’re meant to wonder if Ryan is starting to lose it again.

Knighton, previously a regular on HAPPY ENDINGS and FLASHFORWARD, is fun and rather charming as the new buddy who has his own denial issues, and there are some nice one-liners here.

Mostly, though, “Comfort” is diverting but not very distinctive.