vikings review burial of the dead 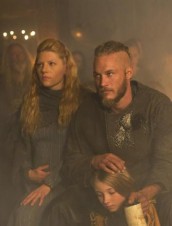 TV Review: VIKINGS – Season One – “Burial of the Dead” 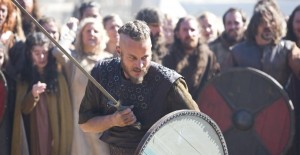 “Burial of the Dead” was the episode that has been building since the very first episode of the season on VIKINGS.

It was the final confrontation between Ragnar Lothbrok (Travis Fimmel) and the leader of their Nordic tribe Earl Haraldson (Gabriel Byrne) and the culmination of nearly everything we have seen on the show up until this point.

Given the brutality of “Raid” from last week where Haraldson aimed at wiping out the entire village where Ragnar lived including killing Ragnar and his family as well as the numerous attempts of the Earl to kill Ragnar, “Burial of the Dead” was rather respectful of the two show leads.

Some of the reason behind this was given by the Earl during his chat with his wife Siggy (Jessalyn Gilsig) where he detailed the reason he hunted Ragnar so intensely was because he sees much of himself in Ragnar and respects him. Of course, that means he had to take him out.

In the end, it was one-on-one and Ragnar, naturally, killed Haraldson claiming his right to the Earl over the tribe and all the powers and riches that come with it. His first order of business is having those around him swear allegiance to himself and his family. As we have seen in the prior episodes, this allegiance means bupkis as Vikings switch sides and backstab each other every episode.

Siggy did use the killing of her husband to dispatch the seedy Swede that Haraldson had his daughter forcefully marry in order to gain more power. So that subplot quickly drew to a bloody close.

One thing that was made entirely clear in the swearing of allegiances: We can’t trust Rollo (Clive Standen), Ragnar’s brother, who continues to have wandering eyes for Lagthera (über hot Katheryn Winnick). Obviously, this will be something that will come to blows at some point it is just a matter of when.

Ragnar’s second order of business is to dispatch a larger raiding party to England – where King Aelle (Ivan Kaye) is waiting for them this time. His secret weapon? A pit of snakes. Really? That’s what you have waiting for them? A pit of snakes? Seems a bit underwhelming to say the least. But we shall see what happens next week.

Some VIKING laws we learned about this episode: