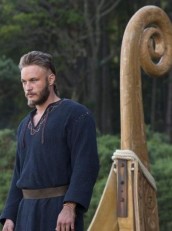 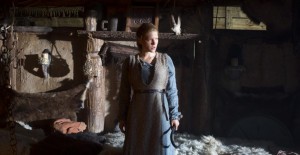 History (don’t call it the History Channel) has been slowly moving to become the next great cable channel to popularize itself with original programming following in the successful footsteps of FX, AMC, TNT and others – obviously which began with pay-TV network HBO. Proving that just having movies and documentaries are just not enough these days and the more successful original programming is what is drawing viewer interest.

History’s miniseries HATFIELDS & MCCOYS was a powerful, emotional and extremely well done production and set the stage for its first original scripted series in VIKINGS. VIKINGS follows Ragnar Lothbrok (Travis Fimmel), a family man and one that longs to see the riches that he believes lies West of the territory they live. However, the current king Earl Haraldson (Gabriel Byrne) is hesitant to go in that direction either because he knows what’s there or is hiding something.

The thing that works with this show is that it is a world that is fairly new and unknown to most people. Sure, people know about Vikings in terms of they sailed boats and fought hard against many men and countries, however, the traditions, beliefs, fears and history is something that is not nearly as known. That alone is interesting because we are seeing characters unlike anything we have seen except maybe from GAME OF THRONES on HBO. Beyond that, if gives new insight into how Vikings acted and what drove them rather than just sailing or fighting.

Here are some of examples of what we found out about Viking law in the initial “Rites of Passage” episode: If you steal you have to participate in the cabbage run where locals toss the vegetable at you with passion as you run a gauntlet; if you murder someone you have only two houses to report the crime to someone otherwise you are said to have done it without remorse or accident – punishment is death (although you get to choose how you go out). I mean really who knew?

However, there is a severe lacking of ships in the opening episode or even water for that matter. They talk a lot about getting a boat to see the new world and yes there is a boat toward the end of the episode but not nearly as much as you’d expect – maybe it is a prelude to things to come. The other thing that is desperately needed is this show to be on a pay network. Being on History, the sex scenes can only go so far and the battles can only be so bloody (although WALKING DEAD as proven it can push the limits) – it is a shame to see so many hot Scandinavian chicks not getting naked (hello, Katheryn Winnick and damn Jessalyn Gilsig looks pretty amazing too).  Hey, I call it as I see it.

Still, there is great promise here in this show and History (based on the initial ratings) may have a hit on its hands.