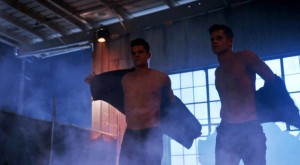 With TEEN WOLF set to have 24 episodes for its third season (double its normal order), the series is not wasting any time in setting things up. In fact, the Season 3 premiere “Tattoo” crams in enough story points, action and horror that it’s very clear the show is declaring we’re in for a very epic new season.

My biggest concern was the series moving its shooting locations from Atlanta, GA to Los Angeles. Atlanta gave the show an amazing look all its own, so to replicate that in Los Angeles could have proven difficult.

However, TEEN WOLF, as it does with so many things, handles this transition right. It’s flawless, and if you didn’t know the show had changed locations, it wouldn’t have even registered.

With “Tattoo”, there’s a major bit of housecleaning, as the show has to a) get fans up to speed on what’s happened since last year’s major Season 2 finale and also address the absence of Jackson played by Colton Haynes (who is now a regular on the CW series ARROW).

The explanation for Jackson is thrown away rather quickly – he’s in London, An American Werewolf in London, leaving the door open for his return (whether it be a cameo or more, at a later date).

The series also jumps to the next school year, so there is a time lapse between the events of Season 2 and 3.

The episode begins with Isaac (Daniel Sharman) being pursued by the Alpha wolf pack with new featured wolfies referred to as the Twin Alphas (Charlie and Max Carver). They have a special trait – they can merge together as a mega-werewolf. Hands down, this is the coolest and most original addition to werewolf mythology in some time. Plus the action sequence getting to that point is pretty amazing too (especially for a cable TV series).

Isaac escapes and is taken to the hospital where he’s saved by Scott (Tyler Posey). Meanwhile, Allison (Crystal Reed) is back in town (and with a new haircut). She wants to talk to Scott, since they haven’t spoken all summer. Clearly, they still miss each other.

Scott wants a tattoo, but it doesn’t take, so Derek (Tyler Hoechlin) helps with his requests.

There are also several signs of the apocalypse looming – or maybe signs that the werewolves are coming. A deer hits head-on on Lydia’s (Holland Roden) car. Birds crash through the class window, terrorizing students. And of course, the Alpha Pack is in town and ready for some carnage. Is this another one of Lydia’s strange supernatural connections?

It’s obvious, Scott will play a major role in their arrival, so it will be interesting how this plays out. The other cool part about it – each Alpha appears to have their own “thing”, so with the Twins being able to merge into one as their special trait, it will be cool to see what the others are capable of as well.

There are other nice story beats along the way, including the revelation that daddy Argent (JR Bourne) has given up hunting. So TEEN WOLF is back to its old tricks of layering in story elements that will definitely get paid off at a later date.

Though Jackson will clearly be missed, his story definitely came to a close at the end of Season 2. Now it’s time for the show to focus on Scott’s continual journey toward embracing his wolf side.

The fact that “Tattoo” wastes no time getting down to business is a good and a bad thing. It doesn’t allow any time to breath and get reacquainted with the series after a year long hiatus, but then again, I like that it’s chewing through its story so quickly to get down to business.

It will be interesting to see what a double order of this Season does for the series and how everything is paced, but in the meantime, it’s just great that TEEN WOLF is back. The ratings for the premiere were up, which proves more people have become fans since last season ended, and it also is hope that TEEN WOLF will have many more seasons left to go.