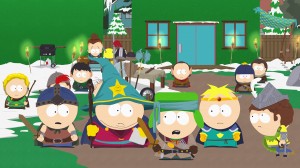 After last week’s dreadful “Ginger Cow” episode, SOUTH PARK bounces back with what may very well be their next multi-episode epic currently dubbed “Black Friday.”

Paying homage to GAME OF THRONES, the story follows Cartman and his friends rallying together to be the first inside the mall stores on Black Friday. The first 20 people inside, get 80 percent off of anything, which means they can be the first to get the new next gen gaming console – an Xbox One or Playstation 4.

Unfortunately, there’s a problem as a rift develops between the kids, because some feel Xbox is better, the others feel PS4 is better. Whichever side wins in gaining the most support, defines which console all the kids will be using from this point forward.

Meanwhile, Stan’s dad Randy gets a job as a security guard at the mall to make extra money – the real truth, he’s working the inside in order to be “the first in line.”

Adding to the potential war brewing as “winter is coming” is a new “Stop Touching Me Elmo Doll,” which parents are arriving in droves early so they can get it for their kids. This commercial is hilarious.

This all culminates with a war brewing, people taking sides, treachery and backstabbing taking shape and, of course, a cliffhanger ending.

Rarely does SOUTH PARK leave on a cliffhanger if they’re not going to pay it off, and considering Black Friday is two more weeks away, it makes sense that this is a potentially two-part episode.

The writing is very sharp this week, with some great GAME OF THRONES observations from Butters about all the nudity in the show. I also love that the security guards are preparing for war as well.

The most topical part about this though is the battle of the gaming consoles. Everyone is weighing the options about which platform will be better and which should be the one people should adopt. It’s a smart way into this “Black Friday” episode and it provides some of the best satire the show has had all season.

Hopefully, the next episode pays everything off in grand fashion.