Home » once upon a time manhattan review

We're going the Greek Side thematically, as Emma and Gold find his son, and yes, we saw what was coming. 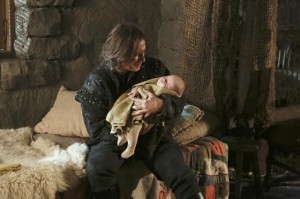 It’s not like we didn’t see this one coming from the season premiere. So it turns out that Gold’s (Robert Carlyle) son Baelfire is Neil (Michael Raymond-Jones), aka Henry’s (Jared Gilmore) father. And you have to give writers Kitsis and Horowitz a lot of credit for not stretching this one out unnecessarily.

But more fun, in the Rumpelstiltskin/Mr. Gold back story, the writers play off the whole seeing the future thing Ancient Greek-style big-time. Oh, and we get a nice little side plot with Cora (Barbara Hershey) leading the search with Regina (Lana Parilla) and Hook (Colin O’Donoghue) for the magic dagger that turned Rumpelstiltskin into the evil critter he is, because that’s pretty much the only thing that will undo him. Or so they think.

And the other side plot, the recovering Mr. Mendell sees Regina doing the magic thing with Belle’s (Emilie deRaven) purse and calls his unknown friend with the news, but nothing more happens on that front either. Which means we’re free to concentrate on the real story – Gold and Neil and Emma (Jennifer Morrison) all finally connecting. You think there are a few issues that need resolving here?

We start in the past with pre-evil-dagger Rumpelstiltskin going off to fight in the ogre wars to counteract the shame of growing up a coward’s son. Back in the present, Emma figures out which place belongs to Gold’s long lost son, who fell through a portal in the first season. Ringing up instead of getting and answer gets a flight and Emma takes chase. Yep, it’s Neil, the long-lost father of her son, which Neil doesn’t know yet. Oh, and we get to find out what was in August’s box that made him run in Tallahassee – a typewriter with the note that August knew he was Baelfire.

So not only is Emma still really, really mad at Neil for abandoning her, she gets to try to talk him into talking to Gold. Now, Neil ran away from Emma to protect her from Gold, and he tries to explain that, but it doesn’t wash so well. Gold, on the other hand, is getting really cozy with Henry, telling him how remarkable and cool he is because he found Emma and helped break the town’s curse.

So back to the past, where things start getting really weird. Rumpelstiltskin is told to guard a cart with his life, but inside is a little girl (Brighid Fleming) whose eyes are all stitched closed, but who has eyes in her hands. Turns out, she’s a seer and she tells Rumpel that his wife is with child, but that he can’t escape his fate and talks about riding cows into battle as a sign. Sounds like Greek mythology to me, especially when Gold, in the present day, tells Henry that seeing the future is like trying to read pieces of a puzzle – prophecies don’t always mean what you think.

Emma first calls mommy, aka Snow White, aka Mary Margaret (Ginnifer Goodwin), back in Storybrooke, and is told that she’d better straighten things out with Henry because Emma told Henry his father was a fireman and dead. Neil is neither. Of course, Neil being Rumpelstiltskin/Mr. Gold’s son does make Henry Gold’s grandson. Charming/David (Josh Dallas) is less than enthused by the idea, being grateful they never had Thanksgiving back home in the Enchanted Forest: “That dinner would suck.” So Emma tells Gold that Neil got away, which doesn’t go over so well.

Back in the past, the wounded are coming in from the battle, and Rumpelstiltskin is told to pick his “cow” or saddle to ride in the next day. Panicked that the prophecy is coming true and that he will die on the battlefield and leave his child fatherless, he hurts himself to get away.

In Neil’s apartment, Gold is getting pretty angry and Neil comes back to rescue Emma. Problem is both Neil and Henry figure each other out and neither are particularly happy. One of the few times I’ve wanted to slap Henry in the face was when he told Emma that she’s just like Regina – lying to him. You’d think the kid would cut her some slack after all she’s done for him.

Neil and Gold have it, too, and Neil is not in a forgiving mood, nor is he willing to let bygones be bygones. It doesn’t matter what Gold says, he still chose evil and magic over Baelfire and let him go through the portal alone. So Neil is letting Gold go. Ouch.

And in the past, the evil Rumpelstiltskin encounters the now grown-up seer (Shannon Luccio) and takes her burden of seeing the future from her and pretty much kills her, but not before she tells him another prophecy, about the curse that will take everyone to Storybrooke, about a little boy who will help break the curse, and that the boy is more than he thinks and will be Rumpel’s undoing. “I’ll just have to kill him,” Rumpel replies.

Except we cut to the next scene, back in the apartment and Gold watches Henry and Neil connecting. The question is, does Gold get that his undoing may be something other than his death? We’ll find out.