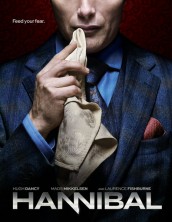 Now Bryan Fuller has created HANNIBAL, based on Hannibal Lecter, a character first brought forth in Thomas Harris’ novel RED DRAGON and played onscreen in the film MANHUNTER by Brian Cox, then very famously by Anthony Hopkins in SILENCE OF THE LAMBS, HANNIBAL and the MANHUNTER remake RED DRAGON (all based on Harris’ books), with Gaspard Ulliel playing the character in the prequel film HANNIBAL RISING (also based on a Harris novel).Hannibal, as most viewers will know, is simultaneously a very perceptive psychiatrist, an aesthete and a cannibalistic serial killer.

By the time of RED DRAGON/MANHUNTER, Hannibal is in maximum security prison, put there by his one-time friend and colleague, FBI Special Agent Will Graham. Fuller sets his HANNIBAL earlier, with Lecter (Mads Mikkelsen) living so undetected that he is himself a well-respected psychiatrist consulting with the FBI. He’s brought in to help out Dr. Will Graham (Hugh Dancy), who has been taken off active duty as an FBI agent, but who still consults with the Bureau. Will’s insights on why serial killers do what they do are a source of inner torment for him, though they make him very valuable to his boss, Behavioral Science Unit chief Jack Crawford (Laurence Fishburne).

Jack greatly wants Will back on active duty. He has Will see Lecter, as well as work with humanistic therapist Dr. Alana Bloom (Caroline Dhavernas). Despite Will’s doubts as to the helpfulness of therapy as it applies to him, he is analyzed and reassured in different ways by Lecter and Crawford.

In the series’ opener “Aperitif,” Will is called in to help figure out what’s going on in the case of multiple missing young women – one of whom is returned, dead, to her own bed. This turns out to be the case of the Minnesota Shrike (referred to in Harris’ novel), with Lecter making a contribution to the situation that won’t be too surprising for viewers familiar with the doctor’s advice-giving tendencies.

Will does an expert job of deducing what’s going on with the killer, who like Lecter has unfortunate eating habits. Our hero is forced to shoot the culprit to prevent the man from murdering his own daughter (Kasey Rohl), who is left in a coma at the episode’s end. Will is traumatized and we can readily understand why, not only logically, but because actor Dancy is so convincing in his troubled empathy.

Mikkelsen plays Hannibal differently than we’ve seen him before. This man is supremely confident, keenly intelligent but always a gentleman, never indicating when he’s being manipulative. His Hannibal lacks the self-satisfaction and overt delight in mind games of previous versions, but of course, this Hannibal is free and going about his life. In any case, it’s a magnetic performance. To paraphrase actor Mikkelsen, this is a charismatic portrait of the Devil.

Dhavernas is warm and likable. Fishburne is intriguing, giving Jack Crawford a balance of sincere concern and a slightly smarmy pushiness that allow the character a multitude of dimensions.

NBC provided several episodes, allowing reviewers to get a better-rounded view of where HANNIBAL is going. The storyline is definitely arced, and some of the imagery is so baroque as to evoke Clive Barker in his BOOKS OF BLOOD phase, which will be a plus for horror viewers and a minus for the squeamish.

As far as how HANNIBAL stacks up against THE FOLLOWING – there’s a lot of basis for the comparison, though fortunately no one is being asked to choose one over the other – Dancy’s Will is a more visibly damaged hero than Kevin Bacon’s Ryan Hardy, who has come to better terms with his own demons. There it’s a matter of one’s personal preference in the specifics of tortured protagonists.

As for the antagonists, James Purefoy’s Joe Carroll has some human vulnerabilities, while Mikkelsen’s Hannibal appears jovially ironclad. These qualities bring out different responses in the viewer; again, which ones we like to have come to the fore is a question of individual taste. Having Hannibal only slightly (when at all) involved with other serial killers allows for a larger and weirder array of pathology than do THE FOLLOWING’s followers, so in that aspect, HANNIBAL is both more flamboyant and less interpersonal with its second-tier characters and their crimes.

Fuller’s dialogue crackles – it’s easy to believe these characters possess the powerful minds the story asserts they have – and the non-supernatural horror has real traction. If this mixture of character drama, suspense and gore is your thing, HANNIBAL is a superb blend.